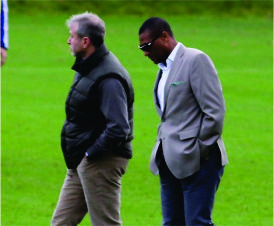 Roman Abramovich told Chelsea’s under-performing players that he didn’t want to sack Jose Mourinho during an address at their Cobham training ground on Friday.

Abramovich was on site to watch this morning’s session, taken by Steve Holland and Eddie Newton, ahead of Saturday’s clash with Sunderland at Stamford Bridge.

The Chelsea owner spoke to the players in his native Russian and it as all translated into English.

He also added that he was left with little option but to fire the Portuguese coach after Chelsea were beaten for the ninth time this season in the Barclays Premier League by high-flying Leicester City on Monday evening.

Abramovich went on to tell the players that it is a fresh start and that he expected immediate improvements following the decision to replace Mourinho.

The club have been in talks with Guus Hiddink for several weeks about taking the job on an interim basis and he is expected to watch Saturday’s clash at Stamford Bridge from the stands.

Abramovich has been flexing his muscles in recent days and is putting severe pressure on sporting director Michael Emenalo to find the right man to succeed Mourinho.

Hiddink has jetted over to Heathrow Airport ahead of his appointment on Friday as he looks to seal a similar role to the one he excelled in at Stamford Bridge back in 2009.