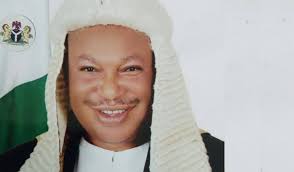 The Imo State House of Assembly has served impeachment notice on the Speaker of the House, Iheanacho Ihim, over allegations of 10 count charge of gross misconduct.

The Speaker was further told to step aside while the lawmaker, representing Onuimo constituency. Chinedu Offor, was elected as an interim Speaker to pilot the affairs of the House, pending investigation of the allegations leveled against Iheanacho Ihim.

At the end of plenary which held behind closed doors, the interim Speaker, Chinedu Offor, disclosed that 21 of the 27 lawmakers that constitute the House endorsed the impeachment notice served on the suspended Speaker.

Offor explained that the lawmakers were provoked by the decision of the Speaker to unilaterally recall the suspended local government chairmen without consideration of objections raised by members of the House.

The embattled speaker, Ihim, is yet to react to the development as he hurriedly adjourned the House and left the chambers with the Majority Leader who has also been removed.