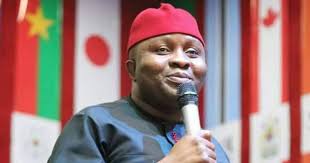 The Deputy Speaker of the Imo state House of Assembly, Ugonna Ozurigbo, on Thursday, tendered his resignation letter 24 hours after the suspension of the Speaker, Acho Ihim, by majority members of the House.

The interim Speaker, Chinedu Offor, had explained that 21 of the 27 lawmakers served impeachment notice on the suspended Speaker and the house Majority Leader, Lugard Osuji.

They were accused of misconduct, misappropriation of House funds and engaging in unparliamentary conduct by escaping with the mace during Wednesday plenary.

But the resignation letter tendered by the Deputy Speaker was silent about the suspension and planned impeachment of the Speaker.

However, Ozurigbo said that he resigned to enable him function well as a member-elect of the House of Representatives in Abuja.