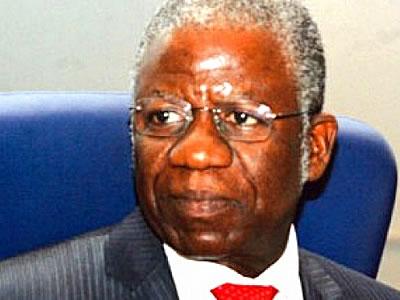 Former Head of Service Stephen Oronsaye standing trial has got  permission from a federal hig court in Abuja to travel abroad for medical treatment.
Oronsaye is grappling with a 35-count charge bordering on money laundering and fraud.
Other suspects being tried alongside the ex-chief civil servant are Osarenkhoe Afe, Global Services Limited, Cluster Logistics Limited, Kangolo Dynamic Cleaning Limited and Drre Investment and Construction Company Limited.
When the matter was called up for hearing, counsel Oronsaye, John Ochogwu, told the court that he had an application seeking permission for his client to travel abroad for medical treatment.
Ochogwu prayed the court to release his client’s international passport to enable him secure visa to travel abroad for medical treatment and come back before April 25, the next adjourned date.
ALSO SEE: Exposed N4b in GTB accounts linked to former deputy governorship candidate
Although the prosecuting counsel, O. A. Atolagbe, did not oppose the application, he expressed displeasure about the absence of Afe and his counsel in court.
“Afe is a respondent in this case and I am surprised neither him nor his counsel is present in the court,” he said.
Justice Gabriel Kolawole, in a short ruling, granted Oronsaye the permission to travel, saying it was predicted in Ochogwu’s plea that the defendant will be in court in the next adjourned date.
Responding to the prosecution’s surprise on the absence of Afe (2nd defendant) and his counsel, the judge said they had always been in court for the case.
Justice Kolawole, adjourned the case till April 25 for continuation of trial.