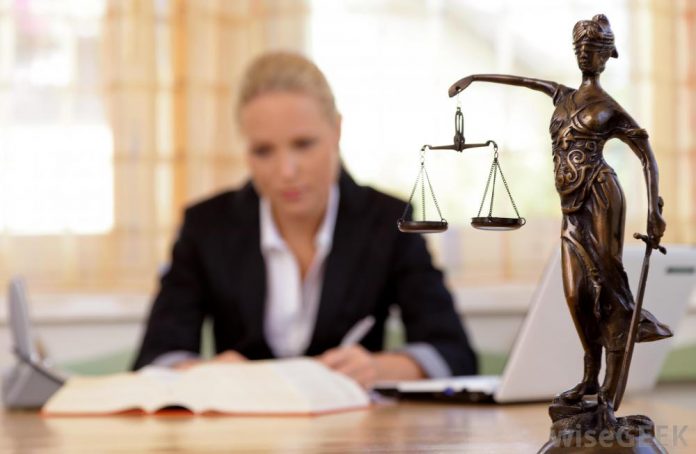 “A lawyer with his briefcase can steal more than a hundred men with guns” (Mario Puzo – THE GODFATHER).

As the fraternal and identical twins are cantankerously different, so also idiosyncratic incompatibilities transverse the totality of most societies. But the mechanics and dynamics of consultative initiative, sound education, good laws and socio-political engineering processes help to build multidimensional bridges aimed at making society a better place and man a more civilized and conscientious homo-sapien.

In building good societies all hands must be on deck towards ensuring justice, equality, rule of law, freedom, peace and progress for all. But the Lawyer and the Judiciary have a fundamentally crucial role to play through the instrumentality of the law and fear of God. But not all lawyers and judges believe in God. Those who believe know that the ultimate judge is Jehovah God Almighty and that ultimately there will be a judgment-(Heaven and paradise on earth for the adjudged good ones).

The ethics of the legal profession is fulcrumed and matrixed on the principles of equity, fairness and transparency in the dissemination of justice. Hence, it is the “NOBLE PROFESSION” and sunken in the groundswell, the moral high ground and grundnorm of NOBLISSE OBLIGE(Noble men must do noble things and all who must go to equity must come with clean hands). The United States Supreme Court Judge Antonio Scalia said “the good societies are not achieved by good laws, but are built upon the effect of one good person upon another and to expect more from law/Lawyers than good behaviour demeans virtue”

All religions believe that there is reward for good and for evil. Religions and moral philosophy share a common concern with the question of what is good life for humanity?. – That is with morality. However, the ways in which philosophy and the religions of the world answer this question differ. Whereas contemporary philosophers tend to discuss morality without reference to anything beyond the human, religions see good and evil within a wider cosmological framework.

The cosmological super structure transcends humanity and revolves around the activities of supernatural beings- God Almighty , gods, angels, ancestors, Satan, demons etc. Religions also maintain that the full significance of good and evil can only be appreciated in terms of beliefs about the continuance of human life beyond the grave. A good life is rewarded with evil, some say Hell. The Eckists, Buddhists, Confucianism, Rosicrucian teachings and Freemasons etc are sunken in esoteric nirvana, karmic laws, meditations , transcendentalisms and transmogrifications  etc.

Hinduism, Jainism, Buddhism and Sikhism see human life in terms of an eternal cycle of birth and rebirth operating according to the moral laws of Karma. Under this law, observance of religious duty is rewarded by good birth, while non-observance is punished by a bad birth. It is now clear that all religions agree that the only way to divine upliftment is through good works. Heaven is heaven, but the expressivity index varies from one religion to another. However, heaven is the dwelling place of God Almighty, faithful spirit creatures, spiritual bliss and afflatus. A place and realm invisible to the human eye.

The nuts and bolts of the legal profession make a lawyer prone and vulnerable to evil and good. But the modus operandi of carrying out his job makes the vast majority of lawyers to lean towards fraudulent manipulations, lying, deliberate falsehoods, Machiavellian legal technicalities to frustrate good judgment, double speak and apocryphal dealings with plaintiffs and defendants, frivolous application for adjournments, legal acrobatics, and manipulating evidences to truncate justice and constitutional pettifogging, etc.

Heuristically didactic books on legal philosophy and ethics like, ‘Dejure belli ac pacis’ by Hugo Grotius, ‘De Justica et De Jure’ by Lessius, De Jure Naturae et Gentium’ by Pefendorf and Tractatus De Legibus’ by Suarez have dealt consummately with the doctrine of necessity’ and the jurisprudential grundnorm of probity and integrity amongst lawyers and the judiciary .

But in our society, certified criminals in high places are being protected by lawyers, unsound and eldrichtly manipulated judgments from some judges. The noble profession is becoming a failed and depraved one because of placebo laws, poor and ludibrastic court verdicts and legal crash helmets are being provided for criminals by lawyers-stimulated by pecuniary inducements.

There is consummate dearth of conscience and fear of God amongst many lawyers in their pursuit of mundane ideals. They capitalize on the ignorance of clients, and have become 419 king pins, political crooks and defenders for pecuniary reasons of confessed assassins, armed robbers, land speculators, ritualists and rapists etc. They put their knowledge to illegitimate, immoral and criminal use under the guise of a criminal is innocent until proven guilt. Hence, Napoleon Bonaparte observed that “doth the wolf tamely relinquish his prey or the fox his booty? How then expectest thou to rescue thy goods from the fangs of the man of law?”

The Warri Branch of the Nigerian Bar Association on Friday January 29th 2010 at the Dr. Mudiaga Odje Hall- Law Centre, Warri held its anniversary lecture in honour of John Alele Esq-50years of private legal practice. The occasion was simply glorious as legal gargantuans from all walks of life graced the occasion with their brilliant presence. Although the keynote address delivered by Late Hon.Justice Niki Tobi, JSC, OFR was titled “Legal Practice in Nigeria: Issues, Challenges and the Need for Reforms”. Lawyers in a lighter mood talked on this question of “Lawyers, the Moral High Ground and Heaven”.

Hon. Justice Niki Tobi, harped on the issue off integrity. He said “if at all any profession needs integrity, that one is the legal profession. A person cannot be a successful practitioner unless he is a person of integrity. A person of integrity is the one who has sound moral fortitude, faithfulness, honesty, fidelity, moral soundness, probity, propriety, righteousness, truthfulness, uprightness of character are all synonymous with integrity in the strict or large content of the word”.

The way and manner in which lawyers and the judiciary compromise integrity remains sordidly eldritch. Hence, Napoleon Bonaparte said “justice is blind, but not always deaf, for in many cases she loveth to listen to the sweet ringing of gold and silver”.

As a palliative on the way forward, he suggested that, the only way to ensure integrity amongst legal practitioners is to step up disciplinary action against erring legal practitioners in the performance of their professional duties. They should either be removed from the Bar list or suspended for a period, depending on the gravity of the professional misconduct. When bad eggs are flushed out, the profession will maintain the required integrity and that should be our goal.

We entirely agree with the submissions of Hon. Justice Niki Tobi, but wish to add that when the fear of God and the desire to make heaven becomes the driving force behind our lawyers and their actions, it will make lasting impact  on them. But who is the ultimate decider as to who goes to heaven. It is our good works, faith and the grace of God. in Jeremiah chapter 9 verses 23 and 24, the Bible said, “ Thus saith the LORD, let not the wise man glory in his wisdom, neither let the mighty man glory in his might, let not the rich man glory in his riches: but let him that glorieth glory in this, that he understandeth and knoweth me, that I am the Lord which excersises loving Kindness, judgment, and righteousness, in the earth: for in these things I delight, saith the Lord”.

In the Grail Message ABD-RUSHIN posited thus, an eternal law operates in the Universe: That in giving can one receives where lasting values are concerned; like a sacred legacy of its creator, this law deeply permeates the whole of creation. To give unselfishly, to help where help is needed and to understand both the suffering and the weakness of your fellowmen; means to receive because it is the simple and true way to the Highest.

Without obstructing the trajectory of this discourse with a gossamer of skewed objectivity, sentimental patitio principi, judgemental fallacies and prejudicial projectiles, it is clear that salvation and the path to heaven is an individual albatross which everybody must work out with fear, respect and reverential apotheosization of God through keeping his commandments. We have seen a thousand and one lawyers and members of the judiciary who have committed themselves to defending the defenseless, being voice for the voiceless and through philanthropic and altruistic gestures touched the lives of the helpless and the poor thereby bettering our society.

We have also seen lawyers and other legal practitioners who have stood and still standing with unweanable proclivity for the nicety and without any nitty-gritty for the truth and transparency of the law and good conscience. They do not resort to establish their averments. It is recorded in one of the synoptic gospels that James and John the sons of Zebedee asked Jesus Christ to grant them a place, one on his left side and the other on his right, when his kingdom shall come. Jesus answered and said “to sit on my left side or on my right is not mine to give, it is meant for those for whom they are prepared”.

Yes, it could be meant and prepared for our lawyers and judges too, if they uphold the truth, display integrity, serve humanity themselves, shun corruption, 419, client manipulations, unnecessary arrogance and luciferous quest for material abundance. Lawyers are by training noblemen, adjudicators, leaders and societal path finders, but when they fail, the oracular counsel admonishes them, thus “As the volcano bursts with a louder explosion, when the combustible matter is confined within his bosom, so will a nation’s revenge find vent, the more their wrongs are repressed”.

Finally, the shipwrecked mariner may escape the raging billows, and the thief the gallows-tree, but not the wrath of God by their names being struck out from the Book OF Life. Lawyers must listen to this ‘CALL TO ORDER’ and revert to the ethics of their profession through fear and reverences for God to enable them make Heaven.