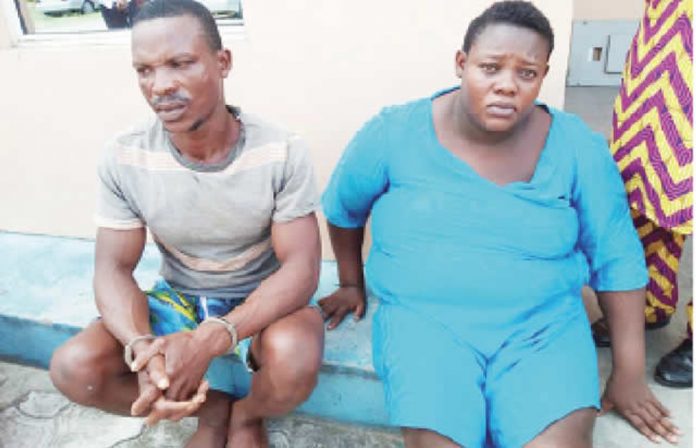 Essien and his wife, Peace, allegedly prepared a poisonous concoction with a certain seed called asene and forced the boy to drink it.

It was learnt that they took the victim to a swamp where he was buried.

The father, who confessed to the crime, said Joseph was a wizard, who killed his former wife.

Our correspondent learnt that Essien married Peace after the death of his former wife, Joseph’s mother.

He added that many of the misfortunes he had been having was caused by the boy.

The state Commissioner of Police, Zaki Ahmed, in his maiden interaction with journalists, said the suspects would be arraigned at the end of investigation.

“On March 25, 2019, operatives of Oron division arrested one Essien Okon and Peace Okon of Edoho Emma Street, Oron Local Government Area, who conspired and lured their son, Joseph Okon, now deceased, whom they accused of witchcraft, into an engine boat on the pretext of going to cut bamboo sticks in a swamp to be used for construction of a kitchen.

“While at the swamp, the suspects removed a concoction, prepared with poisonous seed called aseneand water; they used enema and pumped the concoction into the deceased’s stomach, leading to his instant death. The suspects secretly dug a shallow grave in the swamp and buried the deceased there,” he said

Ahmed added that on April 4, 2019, around 1am, the police stormed a kidnap hideout at Afaha Efiat village, in the Etinan LGA, and arrested one of the most wanted kidnap kingpins in the state, Edidiong Bill, alias Barrister.

He explained that during investigation, the suspect confessed to be the overall leader of the Vikings Confraternity cult in Etinan, adding that he was involved in several heinous crimes, including  kidnappings and robberies within Etinan and Uyo areas.

“The suspect also confessed that sometime in 2017, he masterminded the kidnap of a lady at Akpan Essien Street, Uyo and kept her in an uncompleted building at Obio Eton in Uyo and collected a ransom of N4.5m before she regained her freedom.

“During investigation, the suspect confessed his involvement in five armed robberies and also admitted that he was a member of the Iceland Confraternity cult,” the CP added.

One of the suspects, Bill, who said he had once been jailed for kidnapping, blamed his father for his actions.

He said “I kidnapped three people and collected N4.5m from them; but I lost N3.8m of the money to my father.

“I blame my father because he did not train me well while I was growing up. But when I went to live with him after I had money, he stole part of the ransom from me and ran away with it.”