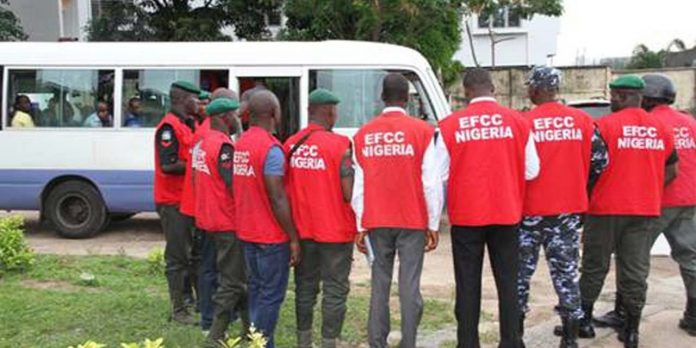 The Economic and Financial Crimes Commission (EFCC) on Thursday dragged four police officers and two companies before a High Court in Lagos for allegedly defrauding the Nigeria Police Force of a whopping N1, 892,832,203

The EFCC stated that the defendants conspired with one Ogbadu Joseph and one Hassan Muhammed, who were said to be at large to steel N1.8bn from the coffers of the Nigeria Police Force and fraudulently converted it to their own between 2013 and 2014.

Count one on the charge sheet signed by Rotimi Oyedepo Iseoluwa, Nnaemeka and I.A Mohammed, counsels to the EFCC, Ogbadu Joseph, who is now at large and the six accused sometimes in 2013 in Nigeria, within the jurisdiction of the court conspired amongst themselves to commit felony, to wit: stealing of the sum of N1, 301,334,108 belonging to the Nigeria police.

The EFCC stated that the six accused and Ogbadu Joseph, who is now at large between 10th day of January and 31st day of December, 2014 in Lagos, within the jurisdiction of the court dishonestly converted for their use the sum N44, 250,000.

National Daily gathered that the six accused persons had been in the custody of the EFCC since they were arrested following a court warrant for them to be in EFCC custody.

Unfortunately, their plea could not be taken during hearing following the excuse given by one of the accused that she could neither speaks nor understands the English language.

All six were therefore ordered to be reminded in prison till November 7 when their plea will be taken.