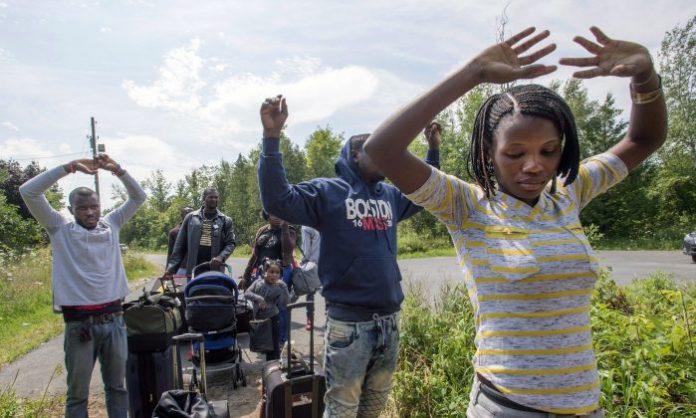 The Canadian government has adopted a new immigration policy that would adversely affect the chances of immigrants who are seeking asylum in the country after illegally crossing through the United States border.

Nigerians notoriously make up a sizable majority of thousands of people who have walked into Canada from the United States to file refugee claims since January 2017.

The trend worried the Canadian government so much that two officials were sent to Lagos earlier this year to work directly with their counterparts in the U.S. visa office to collaborate on how to lower the number of migrants who make asylum claims in Canada using a U.S. visa.

This was because many of the Nigerian asylum seekers in Canada were observed to have arrived bearing valid U.S. visas after having spent very little time in the States.

The Canada Border Services Agency (CBSA), the agency responsible for deportations, disclosed to Reuters that it now classifies border-crossers with criminals as a top deportation priority.

This means quicker processing and deportation of people who crossed the border, unlike in the past when claimants could live in Canada for years while their applications were processed.

Toronto lawyer Lorne Waldman believes that the new policy would easily deter asylum seekers with weak claims from crossing into the country.

“The best way of discouraging people from making frivolous claims is by having the claims processed quickly,” Waldman said.

The new policy is another in a series of attempts by the Canadian government to keep out as many illegal migrants as possible.

Recall that the Canadian Association of Refugee Lawyers (CARL) had dragged the Canadian government to court over a recent court ruling that would make it hard for Nigerians to be granted asylum in the North American country.

The association was displeased with the decision of Canada’s Immigration and Refugee Board (IRB) to establish as a legal precedent its ruling to deny a Nigerian woman’s asylum request.

The court ruled that she could have sought refuge away from her rural family home in any of Nigeria’s large cities of Ibadan or Port Harcourt, and not necessarily run all the way to Canada.

The association said the decision meant Nigerians would now likely face a higher bar to gain asylum status than they did in the past with their acceptance rate (33% as of June 2018) already below the average (47%) for all those who crossed the border illegally, according to data from the IRB.

More than 36,000 people have walked into Canada from the United States to file refugee claims since January 2017. Since June 2017, Canadian authorities have reportedly intercepted more than 7,600 Nigerian asylum seekers with 81% of them having valid U.S. non-immigrant visas in their possession.