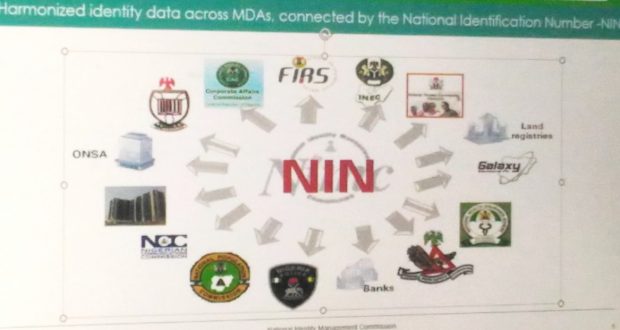 In an interview, the Director General of the agency, Engineer Aliyu Aziz said in 2016 when the process started, NIMC captured up to 14 million and also achieved much in 2017.

He added that NIMC currently had well over 28 million people enrolled with a target of enrolling additional 50 million Nigerians and legal residents by December, 2018.

Aziz made it clear that the remarkable achievement could not have been possible, “but for the dedication, commitment and sacrifices made by members of staff of the Commission on the one hand and the unalloyed support of government at all levels despite the economic meltdown recently witnessed in the country.”

He also acknowledged the push for the mandatory use of the NIN from stakeholders and partners of the Commission in the private and public sectors, especially members of the Harmonization

Committee set up by the Federal Government and charged with harmonizing all identification data.

NIMC boss stressed that “Indeed, their commitment towards the harmonization process contributed to the growth of the Database, as well as increase in the general public’s awareness about the NIN and its benefits”.

Business Hilights gathered that the Harmonization Committee is made up of the about 23 Federal Government Agencies who are stakeholders in the identity sector.

Aziz also explained the importance of registering for NIN, saying “a lot of privileges and benefits coming with NIN registration include one-person-one-identity, ability to verify and authenticate individual’s identity, access to services, claims and entitlement and benefit from government social interventions.

NIMC boss also urged Nigerians to take advantage of the over 900 enrolment centres across the 36 states of the federation and the Federal Capital Territory to enrol for the NIN, saying the Commission is set to commence enforcement of the mandatory use of the NIN for all identity based transactions in the country as enshrined in the NIMC Act No 23 of 2007.

Already, the agency recently gazetted and published supplementary regulations which consist of the set of principles, practices, policies, processes and procedures that would be utilized to achieve the desired objective of enforcing the NIN.

On getting National Identity Cards, Aziz called on Nigerians to be patient as the Commission is working tirelessly to ensure that all Nigerians get their National ID cards as soon as possible.