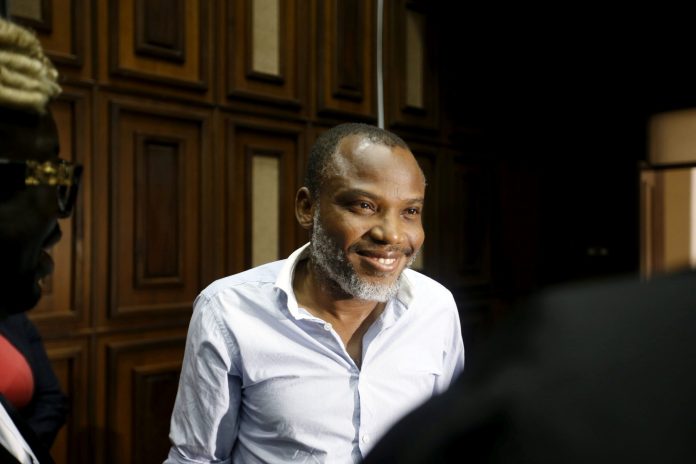 The leader of the Indigenous People of Biafra (IPOB), Nnamdi Kanu, has sent a special message to the members of the group from his detention under the custody of the Department of State Service (DSS), urging them to be steadfast and strong.

Kanu, who sent the message through his lawyer, Ifeanyi Ejiofor when the lawyer visited him in detention, expressed gratitude to all members of the group and those who are fighting for his release.

This was the first meeting between Kanu and his lawyer since his last arraignment in court.

Ejiofor, who is Kanu’s lead counsel, had alleged many times that the DSS had refused him access to his client in violation of a court order.

Justice Binta Nyako of the Federal High Court in Abuja had ordered the DSS to grant Ejiofor access to his client, Kanu, without any further delay.

However, speaking in a statement on Monday, Ejiofor said, “After weeks of speculations and uncertainties, we have finally seen our Client-Mazi Nnamdi Kanu. We can authoritatively confirm this position to the World. He is firm and stable, less the burden of solitary confinement and concomitant mental torture arising therefrom.

“Though the Detaining Authority is giving him medical attention, he still requires advanced medical care, which formed a substantial part of the relief in our application before the Court.

“He specifically requested that we should extend his heartfelt compliment to millions of his supporters worldwide and all foreign Governments and institutions who are relentlessly following up. Media houses are indeed not left out of this classification.

“We are winning but your prayers are doing wonders, don’t relent, as you continue to remain law-abiding.”