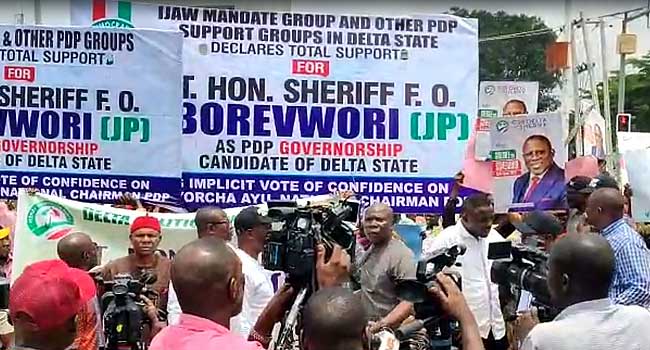 Supporters of the governorship candidate of the Peoples Democratic Party (PDP) in Delta State, Rt. Hon. Sheriff Oborevwori, stormed the PDP National Secretariat, Abuja, to express their unalloyed support for the Speaker of the Delta State House of Assembly, warning the national leadership that “no Sheriff no PDP in Delta State ”.  They demanded to see the PDP National Working Committee to get a reassurance that         the candidate    will not be dropped.

Sheriff Oborevwori had challenged the judgement of a Federal High Court in Abuja on July 7, which disqualified him from being submitted to the INEC as the PDP candidate because of allegations of discrepancies in his certificates.

Supporters of the opponent had also stormed the PDP National Secretariat to demand the candidate’s replacement.

But supporters of the Speaker at the secretariat insisted the PDP must go into the 2023 elections in Delta State with Sheriff as the party’s governorship candidate. They declared “no Sheriff no PDP in Delta State”.

Meanwhile, the Court of Appeal has cleared Sheriff as the PDP governorship candidate in Delta State.

At the PDP state congress in Delta May, Sheriff Oborevwori had 590 votes to win the governorship ticket, while Edevbie had 113 votes.  Edevbie was Finance Commissioner in the James Ibori administration.