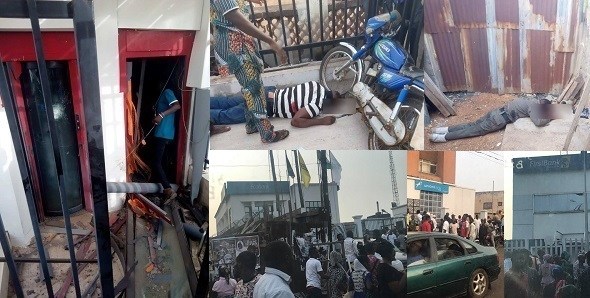 Share this on WhatsApp
Spread the love
Alex Olise
A security guard attached to one of the Bank’s recently attacked by armed robbers at offa kwara state has been arrested for stealing millions of naira after the robbery operation.
National daily gathered from police operatives investigating the robbery that the guard who was not supposed to be on duty that faithful day only showed up after the robbery and went into the bank and stole some millions abandoned the armed robbers unknown to him that there are closed circuit television (CCTV) installed all over the place.
The revelation came as investigation deepens over the remaining masterminders of the multiple robbery which claimed no fewer than 50 lives. It could be recalled that a video released by the police had given out the identities of the major gang leaders who were later arrested by the police.
National Daily learnt that the security guard is currently being detained alongside the armed robbers in Abuja the seat of power.
National Daily further learnt that the security told the police that he used the millions to purchase household items showing them the receipts which the police later used to recover all the money and those he kept at home.
During the investigation another security guard was commended  for his bravery as he switch off the  generator set of one of the banks making it difficult for the robbers to get to the bank vault.
It could be recalled that the Senate President Dr Bukola Saraki was almost implicated over the robbery incident.
Share this on WhatsApp