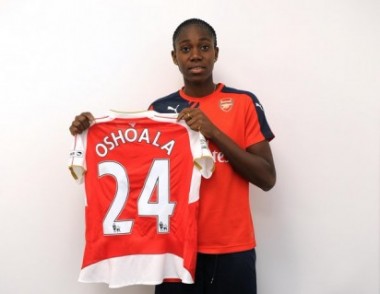 Super Falcons forward, Asisat Oshoala, has been nominated for the Liga Iberdrola player of the week honour following her impressive showing for Barcelona Ladies in their 2-0 win against Atletico Madrid Ladies at the Wanda Metropolitano on recently, National Daily gathered.

Oshoala opened scoring for Barcelona in the 65th minute of the keenly contested encounter.

It was the former Arsenal and Liverpool Ladies’ starlet’s fifth goal in five appearances for Barcelona Ladies in the Liga Iberdrola since her arrival on loan from Chinese club Dalian Quanjian in January.

The Nigeria international is doubtful for Barcelona Ladies Liga Iberdrola clash against LSK Kvinner on Wednesday due to hamstring injury.

National Daily gathered that she has an injury to the hamstrings of the left thigh. Her chances of playing against LSK Kvinner on Wednesday is low and the evolution will mark its availability #FCBFemeni,” reads a tweet on the club’s official Twitter handle.

Oshoala is expected to feature for Nigeria at this summer’s FIFA Women’s World Cup in France where she will be one of the major attractions of the competition.

The Super Falcons are in Group A along with hosts France, South Korea and Norway