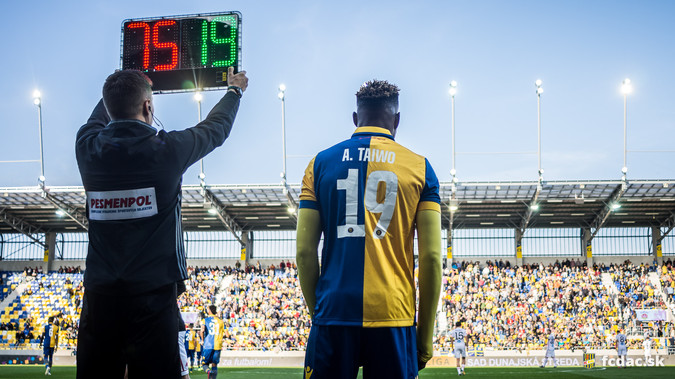 Abdulrahman Taiwo was the hero for his club DAC 1904 once again after he came off the bench to score in their 1-1 draw with Ruzomberok in the Fortuna League Playoffs,National Daily learnt.

Taiwo’s introduction in the second half turned the game on its head as DAC 1904 increased the pressure on the away team which resulted to goal in the 73rd minute, but all efforts by the home team to get winning goal proved abortive.

DAC 1904 is currently third on the log and their chances of picking a Champions League continues to look slim after the draw at home.

Meanwhile, Abdulrahman Taiwo is hopeful his club would pick a champions league place after moving joint second in the Fortuna Liga.

The lanky striker, who signed for DAC 1904 Streda from FC Nitra in January, is gradually settling down at his new base with some eye-catching performances.

The young lad has been involved in all his club’s four matches since the second stanza began.

“I am happy that we have been able to pick up our momentum after suffering some losses in our first two matches in the second stanza; gradually we are finding our feet.

“The form we are now can help us in the playoffs and probably pick the champions league slot,” Taiwo said.