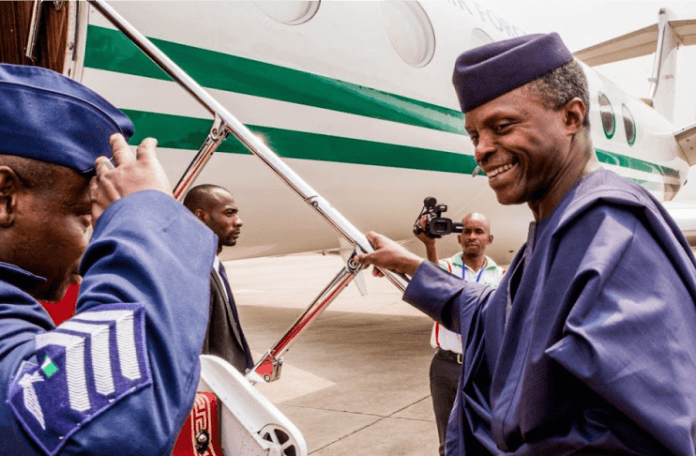 Share this on WhatsApp
Spread the love
By Chioma Obinagwam
Vice President Yemi Osinbajo, is embarking on a two-day working visit to the Republic of Indonesia, during which he will address the opening plenary of the Extractive Industries Transparency Initiative (EITI) Beneficial Ownership Conference taking place in Jakarta, Indonesia, from Monday 23rd October to Tuesday 24th October, 2017.
At the conference, the Vice President will speak on a range of issues concerning Nigeria’s extractive industry and general reforms embarked upon by the Buhari administration in the extractive sector of the economy, among other issues.
A statement issued by the Senior Special Assistant to the President on Media and Publicity, Laolu Akande disclosed.
Other world leaders and top government dignitaries speaking at the event, Akande stated include the President of Indonesia, Joko Widodo; Minister of National Development Planning in Indonesia, Bambang Brodjonegoro; EITI Chair, Fredrik Reinfeldt; among others.
This year’s conference, he noted, which will focus on using beneficial ownership information to achieve national priorities for the extractive sector and to improve natural resource governance, has as its theme: ‘Opening up ownership – sharing practice, building systems.’
Hosted by the Government of Indonesia and other partners, Akande stated, is committed to working on beneficial ownership reform to showcase best practices so far, the conference will discuss challenges, provide peer learning and exchange experiences.
According to the organisers, the conference is coming in the aftermath of the Panama papers scandal that implicated some highly placed individuals with links to the extractive sector across the world.
The EITI last year agreed to adopt new rules on disclosing beneficial ownership for all extractive companies operating in its 52 member countries.
Nigeria joined the EITI to promote prudent management of revenues from its abundant natural resources to reduce poverty and ensure sustainable development.
ALSO SEE: “Adequate policies, support to fashion will help eradicate youth unemployment”
The NEITI is the Nigerian national sub-set of the global EITI.
Moreover, the Buhari administration is renowned globally for its position on anti-graft issues, and its campaign against corruption, which is manifest in the reforms initiated across spheres of government business and in key segments of the private sector.
The EITI has held a global conference at least every three years since 2003, bringing together all stakeholders of the EITI. So far, there have been seven conferences to date.
While in Jakarta, the Vice President will also hold bilateral talks with his Indonesian counterpart, Jusuf Kalla.
Osinbajo will be hosted to a state reception by the government of Indonesia.  He will also meet with representatives of the Indonesian business community, the Chairman, International Board of EITI, and African Group of Ambassadors accredited to Indonesia.
The Vice President, who has left for Jakarta, is expected back in Abuja later on Tuesday.
Share this on WhatsApp
Related Topics:Extractive Industries Transparency Initiative (EITI)Vice President Yemi Osinbajo
Up Next