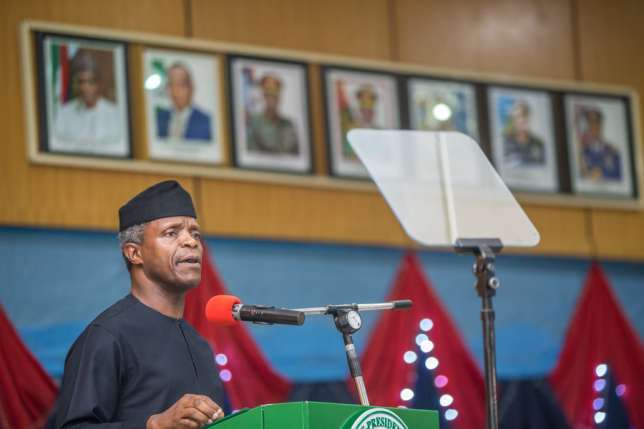 Share this on WhatsApp
Spread the love
By Boluwatife Ezekiel Olaleye
The General Overseer of Redeemed Christian Church of God, RCCG worldwide, Enoch Adeboye, is the first Nigerian to acquire a Ph.d Degree in Applied Mathematics from a Nigerian University, according to Vice President Yemi Osinbajo.
Mr. Osinbajo made this known at the 2017 distinguished alumni awards and celebration of University of Lagos at 55 which held at Oriental Hotel, Lagos on Friday.
Apart from Mr. Adeboye, the Vice president also said the pastor and founder of Mountain of Fire and Miracles Ministry, Daniel Olukoya, was the first to clone genes.
“I want to say that UNILAG has proved time and time again to be not just a university of first-choice but also the university of firsts!
“So many firsts in different areas; just reading about Doctor Olukoya, he was the first to clone genes. Hardly anyone would know that the pastor and founder of Mountain of Fire and Miracles was also the first to clone genes. That is an absolutely outstanding thing.
“The General Overseer of the Redeemed Christian Church of God was also the first Nigerian to get a PhD in a Nigerian university in Applied Mathematics,” he said.
ALSO SEE: Kachikwu vs Baru: Discordant tunes from Aso rock
Mr. Osinbajo, who was a professor of law at the University, expressed his delight at being at the occasion, which, he said, afforded him the opportunity to “enjoy the company of many who have either been colleagues or seniors in the same university”.
He also said “it is not often that one gets to celebrate the 55th anniversary of a great institution”.
The vice president said there are so many other firsts in Unilag, adding, “but the most important thing today is to ensure that those firsts do not become the last.
“We must ensure we continue in the great traditions of the University of Lagos and this is why I am so excited to see a lot of committed alumni who want to see to it that our University goes from glory to glory”.
Share this on WhatsApp
Related Topics:Applied MathematicsEnoch AdeboyeRCCG worldwideRedeemed Christian Church of GodVice President Yemi Osinbajo
Up Next

Why I am contesting Lagos PDP Chairman – Adewale