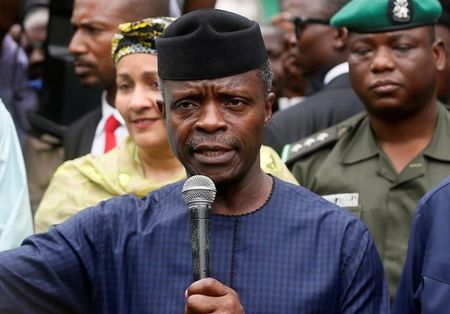 Vice President Yemi Osinbajo has waded into the unending crisis of the Nigeria Football Federation (NFF) as he is set to hold a meeting with the Amaju Pinnick led-board this week,National Daily learnt.

At a planned Congress scheduled by the Chris Giwa led faction on Thursday has been put in the cooler to give way for the meeting called by the Vice president.

World’s soccer ruling body FIFA on recently gave Nigeria till August 20 to resolve the crisis in the Glass House or face ban.

FIFA and CAF member Amaju Pinnick and Ambassador Chris Giwa have been locked in legal battle since the last NFF election. Both divide observed a make-shift peace just before the World cup to allow the Super Eagles who qualified in style for Mundial in Russia attend the championship.

But the case again re-opened immediately after Nigeria crashed out of the world cup with conciliatory moves by stakeholders meeting a brickwall.