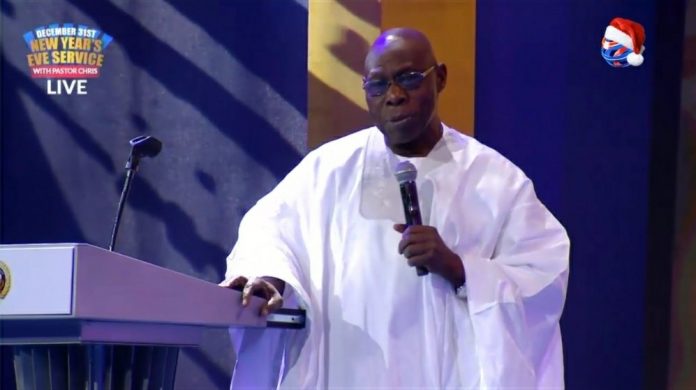 Former President of Nigeria, Chief Olusegun Obasanjo has described the founder and President of Loverworld Incorporated also known as Christ Embassy, Pastor Chris Oyakhilome as a man of God and ability who is using God’s gift to a great advantage for Africans.

Obasanjo who disclosed this at the 9th edition of the prestigious Future Africa Leaders Foundation awards (FALA), said Pastor Chris has made a great difference, impacting many lives both within the African continent and the world at large.

“I am particularly delighted to be here tonight, but more than that. Indirectly to be co-opted into this exercise of identifying, mentoring and encouraging young African Leaders of Tomorrow.

“I have no doubt in my own mind that the purpose of God creating each and every one on earth is to make a difference wherever we may be. Chris Oyakhilome has made a great difference.

“God has given us men and women of ability, of industry. Who can give us and turn what God has given to us to a great advantage. So that Africa will not be lagging behind among the continents of the world. So, what my brother Chris Oyakhilome is doing with the Future Africa Leaders Award is to identify, encourage and develop leadership that will make Africa great.

“All we need is encouragement, the identification of those who will lead. Encouraging them and powering them, mentoring them and monitoring them so that they will come take us to the Promised Land. My dear brother once again I congratulate you and I thank God for your life, for the great work you are doing.”

Earlier in his speech, President of the Future Africa Leaders Foundation, Pastor Chris Oyakhilome highlighted the need for Africa and Africans to look within themselves in their search and quest for solutions to their problems.

He also encouraged every young African who is making a difference in various spheres of their respective African communities to do more and stop at nothing in making Africa the Africa of our dreams.

In his speech, Pastor Chris highlighted the importance of technology and technological advancements as a vital tool and ingredient in solving peculiar African problems.

In his own speech, former President Goodluck Jonathan expressed his appreciation to the Chris Oyakhilome Foundation for their remarkable exploits and achievements in making humanity, especially in Africa, a better place.

Also speaking at the event, former ambassador and representative of the African Union to the United Nations, Dr. Arikana Chihombori-Quao expressed the failure of most African unions who had come together to disengage, disapprove, and discontinue the saprophytic relationship they have with most western countries.

She clearly disapproved of the idea of the black attributes imposed on the people of Africa.

The presentation of the award was the highlight of the night as the esteemed president of the foundation handed over trophies to 10 dynamic Africans from 10 countries. Each trophy was accompanied by a whooping sum and cash price support of 10,000 U.S dollars.

Their remarkable achievements were announced and displayed publicly as a means of encouragement to them and other young Africans watching.

The awards ceremony also witnessed the presentation of the star prize award of $25,000 to Nzometian Nervis Tetsop from Cameroon, an exceptional innovator and community builder with great enthusiasm for youth leadership development.

This champion of innovation initiated a challenge for 20,000 tech lovers and entrepreneurs in his country, motivating them to design and implement solutions for sustainable development in various sectors, including transportation, education, agriculture, finance, health, and so on.