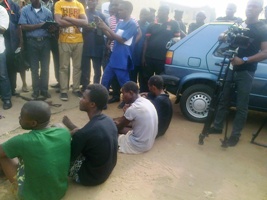 The Imo State Police Command has arrested the killers of one Nigeria Customs Service officer (names withheld), who was on September 23, 2015, slain. While on an official duty by a gang of hoodlums.

The Commissioner of police in the State Mr. Taiwo Lakanu who disclosed to Newsmen in Owerri   mentioned one Chibuzo Ike (m) of Umuota Umuhu in Ngor Okpala Council Area of the state and Henry Ndubisi Simon (m) of No 24 New road Amakohia in Owerri North Local Government Area of the same State, to be the suspects behind the dastard action.

The late customs officer was said to be one of the officers on beat duty on the ill-fated day at Umuhu (along Owerri-Aba road) in Ngor Okpala LGA, attacked by hoodlums that emerged from a nearby bush.

According to the CP “owing to the attack on the ill-lucked officer, he was killed and his AK 47 riffle as well as his Mazda 626 saloon car taken away by the hoodlums”.

Mr. Lakanu added, that hoodlums were nabbed following a painstaking investigations by the operatives of the State Command’s Criminal Investigation and Intelligence Department.

Lakanu also stated stated that one of them, Henry Ndubuisi led the security to hideout of other gang members at World Bank Area in New Owerri.

He said, “At the hideout, AK 47 riffle and its magazines assigned to the slain Custom Officer were recovered.”

Also recovered, he said were one Mazda 626 saloon belonging to the late officer, one bucket containing suspected IED materials, two small batteries and one small rod.

Meanwhile, Lakanu said that investigations were still on going and that concerted efforts were being made to apprehend other members of the gang for prosecution.

Fielding questions from journalists one of the suspects, Chibuzo Ike testified to the crime saying that they killed the officer because they want to sell his car in order to make money and enjoy the Christmas lavishly.

Clearing agent in court over allege defrauding client of N2.8m