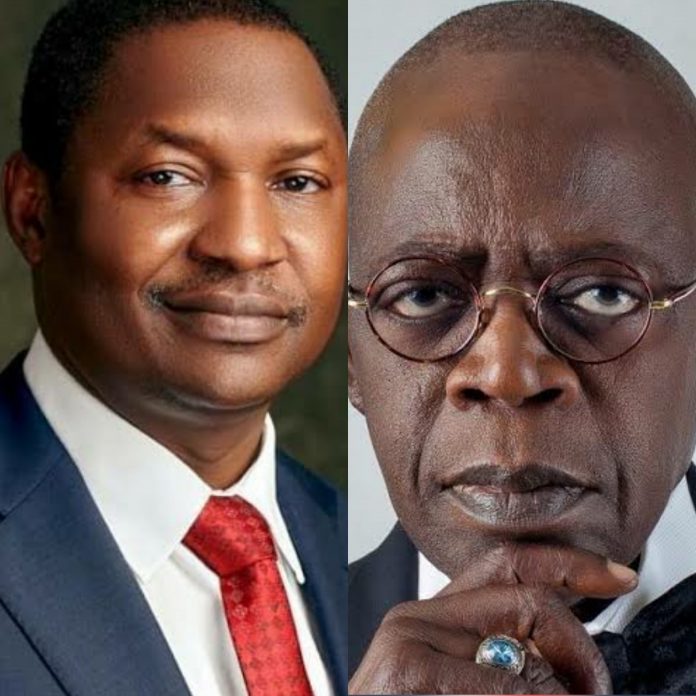 There is emerging insinuation that some governors of the All Progressives Congress (APC) and the Attorney General of the Federation and Minister of Justice are plotting to frustrate the presidential ambition of the APC national leader, Asiwaju Bola Tinubu. A source identified as a seeming discontented member of the Buni-led national caretaker had alleged that the national chairman of the APC Caretaker/Extraordinary Convention Planning Committee, Governor Mala Buni of Yobe State, in collaboration with some other APC governors and AGF Abubakar Malami are muting the idea of consensus presidential candidate for the party to stop Tinubu, who on Monday went to the State House, Abuja, to inform President Muhammadu Buhari of his 2023 presidential ambition, from picking the APC ticket. The source alleged that Governor Buni is aspiring for vice president, and is therefore, using the caretaker committee to delay the APC national convention for the election of members of the party’s National Working Committee (NWC) from holding in February 2022 as scheduled.

The source, a discontented member of the Buni-led national caretaker committee, had emphasized that the ambition of Governor Buni to be vice -president threatens the chances of Tinubu picking the APC presidential ticket.

The source was cited to have stated: “It is true that there is a crisis in several states. But I can tell you categorically that the delays in holding this convention are caused in part by Buni’s ambition to be vice-president.”

The source further alleged that Governor Buni and his collaborators who opposed mandatory direct primaries for political parties in the Electoral Act amendment Act are plotting towards the emergence of the APC national chairman and the party’s presidential candidate through consensus at the respective national conventions.

According to the source: “the consensus method would be used in edging out the likes of Tinubu who has a strong following in the party.”

The discontented committee member identified some APC governors who include Governor Abubakar Bagudu of Kebbi State; Governor Kayode Fayemi of Ekiti State, Governor Muhammad Badaru of Jigawa State, as well as the AGF and Minister of Justice, Abubakar Malami; who he accused of putting pressure on President Buhari at a meeting of the APC National Executive Council to dissolve the NWC and appoint a 13-member caretaker committee led by Governor Buni. The dissident committee member stated that Buni has become so powerful as the committee leader and has been dictating everything.

Meanwhile, the committee member was cited to have vowed utmost resistance to the perceived plot. According to the member: “We are going to put our foot down and demand that a date for the convention is announced this week. If not, we will take the gloves off.

National Daily in an earlier report identified the APC presidential ticket for the 2023 elections as one of the crucial factors that will play out at the party’s February national convention. Our report also linked this to Tinubu’s presidential ambition.

The preparations for the APC national convention have continued to generate tension and apprehensions in the party, compelling some APC stakeholders to speak out, issuing certain threats.