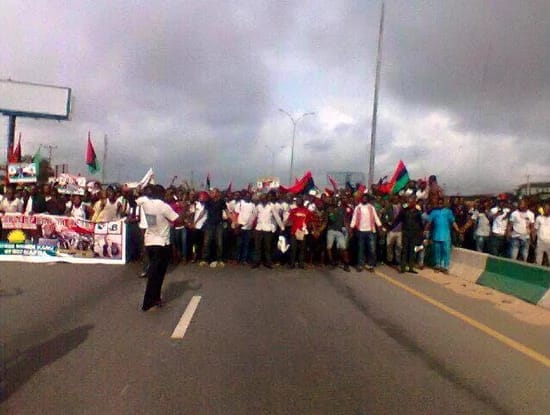 The Pro- Biafra agitators seems to have taken their protest to Lagos, this morning as a good number of them where alleged to have gathered for mass protest at the Ojo axis of the Alaba-Ojo road demanding the release of the director of radio Biafra, Nnamdi Kanu.
Though few days ago, the Lagos state Chapter of the All People Congress [APC] had issued a directive prohibiting any form of protest, by members of the Movement for the Actualization of Sovereign state of Biafra [MASSOB], in other not to provoke any unrest in the state. This was issued through its Publicity Secretary Mr. Joe Igbokwe. ‘’As a party that governs Lagos, we will not watch a group of politically sponsored hoodlums to tamper with the tight security system that has been effortlessly put in place by the state government to combat increasing crime in the state.’’ It reads.

Share this on WhatsApp
Related Topics:MASSOBOhanezePro-Biafra agitators
Up Next