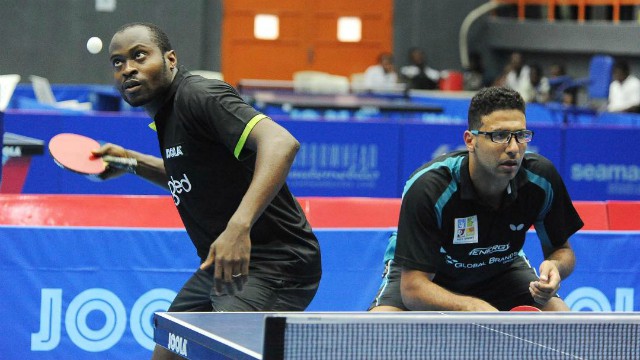 The two best players in Africa – Aruna Quadri of Nigeria and Omar Assar of Egypt will be leading the continent’s contingent to the first ITTF World Tour in 2020 – German Open holding at GETEC Arena in Magdeburg on Tuesday January 28 to February 2, 2020.

2019 ITTF Africa Cup Champion, Omar Assar of Egypt will lead a six-man Egyptian continent in the men’s singles.
Before the start of the tournament on Tuesday January 28, the Egyptian delegation has been in Germany warming up for the competition with technical input from one of their national coaches -, Maged Ashour.

Aside Omar Assar, other Egyptian stars expected to be in action in Magdeburg are Assar’s sibling, Khalid as well as veteran Egyptian, Ahmed Saleh. Others are Mohamed Shouman, Karim Elhakem and Mahmoud Helmy.

Having put the disappointment of missing out from the team event of Tokyo 2020 Olympic Games behind them, Nigeria’s Aruna Quadri and Olajide Omotayo will also be competing at German Open.

Omotayo had earlier this year said that he would compete in some of the elite tournaments this year as part of his build up to Tokyo 2020 Olympic Games.

“I hope and believe I can make it to Tokyo 2020 because I know that my winning the African Games means more hard work and that is why I am going to compete in some of the elite tournament this year. I am starting with the German Open with the hope that playing against the best in the world would toughen me and also help me to be in shape for the African Olympic Qualifying Tournament in Tunisia next month,” Omotayo.

For Quadri, it promises to be a long route to the main draw as only the top 16 players in the world were listed in the seeding list while the Nigerian is rated 18th. This development has prompted Quadri’s participation in the preliminary round which serves as a pathway to the main draw.

Africa’s most improved player in 2019, Ibrahima Diaw will be hoping to repeat the feat that saw him rose to 76 in the world in 2019 as the Denmark-based star will be competing from the second round of the preliminary while he will partner Nigeria’s Olajide Omotayo in the men’s doubles.

Two African female stars – Dina Meshref of Egypt and Cameroun’s Sarah Hanffou will also be inaction in the women’s singles being part of their build-up to the 2020 Africa Top 16 Cup holding in Tunisia next month.

Hanffou who is eager to compete at Tokyo 2020 will also be using the tournament to tune up for the African Olympic Qualifying Tournament as she hopes to seal one of the four slots at stake in Tunis.

Oyo Unity Cup: The start of a revolution in football – Minister