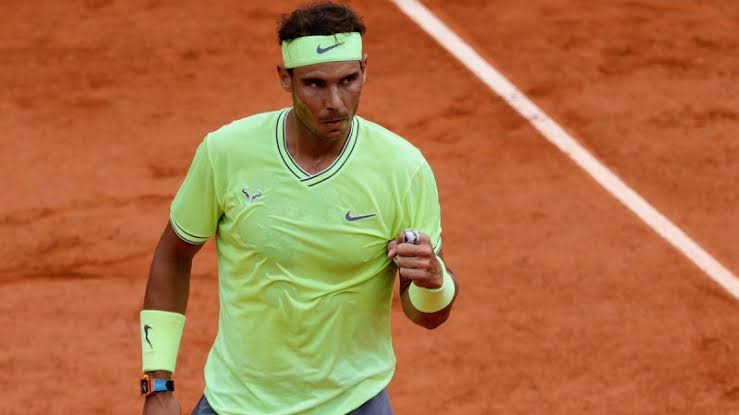 Share this on WhatsApp
Spread the love
Rafael Nadal beat Dominic Thiem at Roland Garros to claim his 12th French Open crown and 18th grand slam title, National Daily gathered.
The Spaniard won 6-3, 5-7, 6-1, 6-1 against the fourth-seeded Austrian and is now only two grand slam titles behind Roger Federer’s record of 20.
Nadal did not have it all his own way in the first set as he shook off a little rust. Thiem broke serve first but this only prompted the world No 2 to raise his game and battle back to prevail 6-3.
Nadal and Thiem were more evenly matched during the second set until the Austrian conjured two set points from nowhere to break the Spaniard in the final game.
ALSO READ:Federer, Nadal threaten Djokovic bid for historic Slam
But Nadal quickly rediscovered his groove, giving up only seven points on his way to claiming the third set 6-1.
The Spaniard carried that momentum into the fourth set and broke Thiem’s serve at the first time of asking. He survived break points in his next service game but battled back to hold and broke Thiem again in the sixth game. That left Nadal to serve for the match and he made no mistake to wrap up his 12th Roland Garros title.
Share this on WhatsApp
Related Topics:5-76-16-1 against the fourth-seeded AustrianNadalRafael Nadal beats DominicRoland Garros to claim his 12th French Open crown and 18th grand slam titleSpaniard won 6-3
Up Next