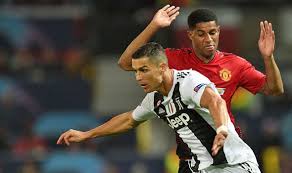 Marcus Rashford says Cristiano Ronaldo is his biggest inspiration in football and is amazed at the Juventus striker’s longevity.
Rashford is currently in Turin with the Manchester United squad as they prepare to take on Ronaldo’s Juventus at the Allianz Stadium in the Champions League on Wednesday evening.
Despite turning 34 early next year the Portuguese is showing no signs of slowing down, netting seven goals in 13 games in all competitions while adding six assists since moving from Real Madrid in the summer.
Rashford says Ronaldo’s ability to maintain such a high level of performance despite his advancing years is what is most impressive about the forward’s career.
“The thing that is a massive eye-opener for me now is I remember when he first came his talent was arguably one of the biggest talents that we’ve seen at United for a long time; to have him and Wayne [Rooney] in the same team was amazing when you look back. But the way he’s sustained his career and even improved year on year is just amazing,” Rashford told Manchester United’s official website.
“People don’t do that at his age, people are usually heading towards the end of their career and their level starts going down a little bit, but he’s just gone up and up and up.
“For me, there is no bigger inspiration in football. I could speak for a lot of young players and United fans that watched the team when he was here and the majority of us have followed him as he’s moved on in his career and that’s what’s special about United.
“Once you play for this club you become part of this family even if you move on. There is always something that remains in your heart, you could see that when he returned [to Old Trafford] from our fans.
“When you play against a player like that you have to respect his qualities but at the same time you have to play your game and you can’t show fear to that type of player.”
United head to Italy looking for a response after they were beaten 1-0 by Massimiliano Allegri’s side at Old Trafford last month, a result that put the Serie A side five points clear of the Red Devils at the top of Group H.
England striker Rashford says his side have taken a lot from that defeat and is expecting a much-improved performance on Wednesday evening.
“The home game was a game with a lot of lessons. It was a game where we could have lost 2-0, drew the game 1-1 or won the game 2-1,” he added. “I think in that game we left it a bit too late, but we learnt from it and we go again.
“There have been times when we’ve got it right and there will be times when we get it right again and times when we don’t, but we have to understand that it doesn’t always go to plan, and we have to be ready for that.
“I think it’s good to have the two games quite close together because the first game is quite fresh in a lot of people’s minds. I wouldn’t say it’s easier to prepare for it, but you feel ready to face it.”