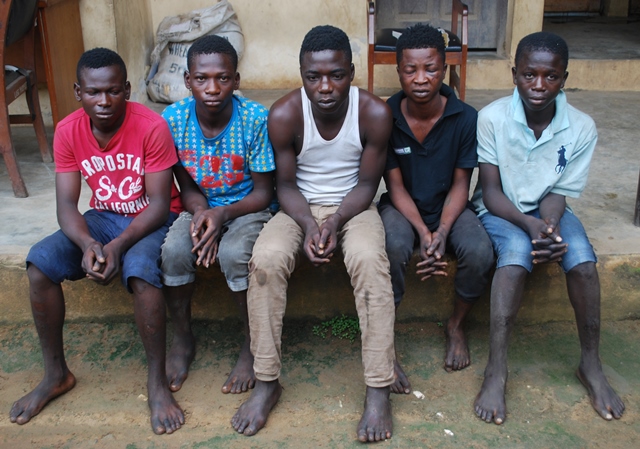 In a desperate bid to rid Lagos of miscreants, men of the Rapid Response Squad have arrested 37 miscreants and five teenage traffic robbers in Oshodi.

The 5 teenage robbers were arrested when RRS men raided many black spots in the metropolis on Thursday based on a tip off from one Mrs Okechukwu Abes, whose bag and phone were snatched by gang at Oshodi Under Bridge.

Confirming the robbery, Ajala Lateef, a secondary school dropout from Isale – Eko, said their ring leader, Taiye, still at large, pretended as a passenger and snatched Mrs Okechukwu’s bag and mobile phone while she was boarding a bus.

“I know Taiye very well, he sleeps in Oko – Mola at Oshodi Under Bridge. I have seen him in different occasion dispossessing passersby in Oshodi of their bags, phones and other belonging. Most times, we pretend as passengers to rob people’, Ajala stated.

The Commander of the RRS, Assistant Commissioner of Police, ACP Olatunji Disu said that RRS would continue to work round the clock to make Lagos a safe haven for those with legitimate businesses.

Disu emphasized that the force has been charged by the Governor, Mr. Akinwunmi Ambode and Commissioner of Police, Fatai Owoseni to rid the state of all forms of criminals.

He called on Lagosians to assist the police by supplying information that would help the police to curb crime and track down criminals adding that perpetrators of crime live among us.

The suspects have been transferred to the State Investigation and Intelligence Bureau, Ikeja