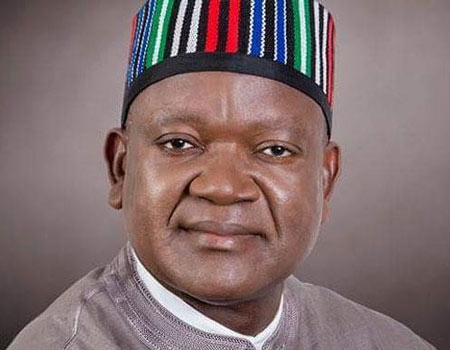 Barely two weeks after Samuel Ortom of Benue state disclosed that he has been given a red card by the All Progressives Congress (APC), the embattled governor has formally announced his defection to the Peoples’ Democratic Party, PDP.

The governor announced his defection at a meeting with local government chairmen and councilors at government house, Makurdi, on Wednesday.

He said that he has forwarded his resignation letter from All Progressive Congress, APC to his ward chairman.

He assured the readiness of the APC ward chairman to join him in the new party.
Recall on July 16, Ortom said the All Progressives Party, the platform on which he was elected, had given him a red card, adding that he is currently a freeman and waiting for any party that would admit him into its fold.

The governor’s statement is not unconnected with speculations that the APC in the state had dumped him following the political crisis between him and Senator George Akume, the leader of the party in the state.

The party is also said to favour the governorship aspiration of Barrister Emmanuel Jime, who lost to Ortom in 2015, and it may have resolved not to give Ortom the governorship ticket in next year’s election.

The governor said: “Many people have been asking that as we dedicated the state to God we are still facing challenges. The Israelites passed through the wilderness, where there were giants, wild animals and other things that were harmful, but God took them to the Promised Land.”

Speaking further, he said, “All these challenges that we see today, we shall see them no more. All that we are required to do is not to begin to be wayward in our conduct but to move to the righteous side of God. Once we do that, things will work out for our good.

“Looking at what is happening to us, sometimes I am tempted to think that we are dying like people who do not have God.

“But we must choose the path of working with God, obeying and serving him. If we do that and ensure that his values get into our hearts and we work with him, development will be inevitable. Let us work and encourage those things that can develop us.

There is grand design to silence, humiliate Igbo leaders – Ohanaeze

More reps to defect to PDP