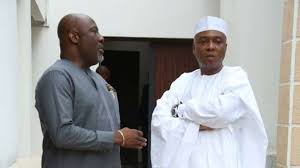 The Nigerian Senate has been carrying on like nothing happened as the embattled Sen. Dino Melaye was schlepped to the Special Anti-Robbery office in Abuja after a 20-hour siege on his Shanga home, Maitama, Abuja.
The house resumed its sessions as usual, and Senate President Bukola Saraki performed his ceremonial functions, and a bit of do-gooding, too, by pinning a dog-tag on a member of his police orderlies that just got promoted.
The NASS Twitter handle summarised the series of Monday and Tuesday legislative rituals without a mention of Dino in distress.
The Kogi senator known to be a diehard loyalist of Saraki’s is now being grilled for complicity in sponsorship of a killer gang whose members named him in their confession.
Melaye was alleged, by one of the gangsters police earlier arrested, to have armed the group with AK-47 and Pump-Action Machine guns, and N400,000.
The police claimed they invited the senator for interrogation but he refused to respond to the summons, leading to the manhunt launched on him weeks ago.
The police effort to arrest him Monday nearly failed as the NIS which initially prevented him from flying out to Morocco allowed him to walk off.
While the police mounted surveillance and cast out its net on Melaye’s residence, only four members of the upper house came to see for themselves what their colleague was going through.
Saraki, who many believe, would play the fairy uncle to Melaye has not said a word in respect of the siege on a senator of the Federal Republic of Nigeria.
This would be the second time Saraki would cut his man Friday dead.
In March, the SARS operatives bombarded a court house in Abuja where Melaye just secured bail, waiting outside to arrest him.
The senator had to keep his head down there till dusk when he stole out the gang way.
A letter the police authorities said it earlier sent Saraki about the arrest of Melaye was not discussed on the floor.
Nigerians are already speculating the boisterous senator will hang out a lot of dirty wash if it’s certain he’s going down with this allegation.
A report on Sahara Reporters in March stated that Melaye already threatened the house many of them would lose their scalp if they didn’t rally round him.

Share this on WhatsApp
Related Topics:Bukola SarakigangkogiMelayeNASSPoliceSarakiSenateSenate President
Up Next

Police explain why Dino Melaye was arrested for interrogation