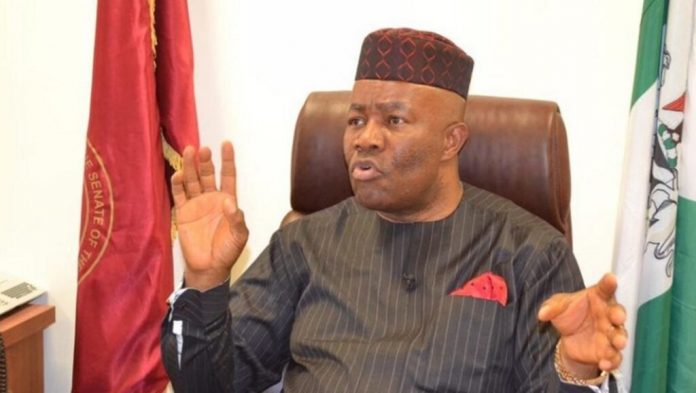 Share this on WhatsApp
Spread the love
My dear Compatriots, determined to pay the debt of gratitude I owe our nation for the opportunities to serve in high offices of public trust; determined to let our nation drink from the deep well of experience acquired in these offices, I, Senator Godswill Obot Akpabio, with great humility, hereby, submit myself for our kind consideration as your next President.

“I pay tribute to President Muhammadu Buhari for the patriotic work he has done as our President. He has given hope and direction to governance and fought corruption with uncompromising zeal. He has touched lives and empowered people, he has made great advances in agriculture, human capital development, and indeed, in all sectors of our economy.

“He has uplifted the integrity of the Nigerian nation. A lot can be said about all his amazing successes and achievements, but suffice it to say that I have come to perfect his marvelous works. Absolute perfection belongs neither to man nor angels but to God alone. The labours of our dear President Buhari and our past leaders shall never be in vain. In line with this expectation in our National Anthem, I have come to build based on their developmental strides; to serve our country with heart and might — serve her as a nation bound in freedom, peace and unity, where the dividends of democracy shall be guaranteed.

Also read: Akpabio: An uncommon courage in a time of fear

“I have come with these key items on my agenda: to secure lives and properties; to make unity the touchstone of our nationhood; and to invigorate our economy, prosper our citizenry and promote democracy.

“In 2007, I was elected the Governor of a pedestrian state, languishing on the margins of our national life. A couple of

years later, a European Union Ambassador to Nigeria, visited the State and described what he saw, in amazement, as “transformation extraordinaire.”

“He inadvertently became the originator of the swansong “Uncommon Transformation” which other amazed visitors and residents of the state still echo till now. In Eight years of Uncommon Transformation, we gave the State one of the best road networks in the country (the roads built by us 14 years ago are still pot-hole free).

“We gave the State free and compulsory education for all children up to Senior Secondary School; we gave the state free medical treatment for pregnant women and for babies up to the age of five; we delivered to the State world-class facilities like the International Airport, Tropicana Entertainment Centre, E-Library, Ibom Specialty Hospital (rated as one of the best in Africa), Africa’s first-ever underground pipe-jacking drainage system, Ibom Power Plant, Akwa Ibom State University, the Godswill Akpabio International Stadium and many other projects too numerous to mention.

“We did so much that then serving Presidents and past country leaders wondered where we got money from to do all that we did. The trick was in our vision, strategic planning, commitment and honest implementation.

“Together we can do more than this for Nigeria. At the Nile Valley in Egypt, people of different colours, languages, religions and ethnicity cohabited peacefully and gave the world its first modern civilisation. We are a reflection of that alluvial Nile Valley and together we can reinvigorate peace, unity and development and become the envy of the world.

“This is why I am seeking to be your President. I have done it before as Governor; my office pursued national unity with great zeal. I sent both Christians and Muslims on pilgrimages. The office reflected Federal Character because of my abiding faith in Nigeria and its diversity. Not only did we win uncountable awards and honours, and commendations from institutions like the United States Congress, the Nigeria Defence Academy, foreign countries, prestigious institutions of higher learning, prominent religious and ethnic organizations; even Wikileaks, referenced myself as a leader to watch due to my infrastructural revolution and efforts in industrial development.

“We took that pedestrian State out of the margins of our national life and made it a cynosure of global interest. It attracted global icons such as the President of the Republic of Ghana and the Republic of Ivory Coast; the Prime Minister of St Kitts and Nevis; one-time USA presidential aspirant, the Rev Jesse Jackson; diplomats; global sports icons like Don King and Evander Holyfield; and a host of others. I am offering my humble self for service to our dear Nation because I believe that together we can make Nigeria the cynosure of global interest and an African economic lion. There is nothing the Asian tigers have, in terms of human and material resources that we do not have.

“As a Minister of the Niger Delta Affairs, we have completed projects abandoned for decades and thought to be beyond salvage. We have had key projects commissioned by Mr President. This uncommon feat was achieved through the support of Mr President. We have effectively repositioned NDDC to meet its core mandate. As a first time Senator, after my work as Governor, my distinguished colleagues found me worthy and elected me as their Minority Leader. This was in recognition of the great equity and value I brought to the Senate. I pay respect to that Hallowed Chamber for that honour. I praise God for His grace.

“The road to Governorship of Akwa Ibom State was marked by immense value-added as the Commissioner of Local Government and Chieftaincy Affairs, Commissioner for Lands and Housing, and Commissioner for Petroleum and Natural Resources. In Local Government and Chieftaincy Affairs, I left a record in conflict resolution and raised the bar of respect and dignity for the traditional institution in Nigeria, and as your President, we shall give the traditional institution a voice in the functionality and maintenance of peace in our dear country.

“In Lands and Housing, we undertook land reclamation and estate development. In Petroleum and Natural Resources, we connected with Niger Delta issues and maintained peace among the youth and assisted in bringing militancy to an end in the Niger Delta Region. All these experiences paid off when I became the Governor, which led to this commendation by our eminent patriot and father of this democracy, General Abdulsalami Abubakar, GCFR, when he visited the State:

“So I declare today conscious that this declaration has raised the bar of hope for all Nigerians, poor or rich. Christian or Muslim. I was raised by a poor, loving mother, who lost her beloved husband six months after my birth. She taught me that life is not about where you came from, but where you are going.”

“After primary school, I missed a year of schooling because she could not afford my school fees. Despite this, my love for education drove me to sneak into a nearby Secondary School. One day the security of the school chased me through the forest and I fell on a tree trunk and severely injured my leg. That scar left behind a constant reminder that I should always drive children to school, drive people to development, drive goodwill in all my endeavours and be fair to all.

“It is said that a good heart is the key to an open door; I eventually gained admission to Federal Government College, Port Harcourt. This premier Unity school imbued in me my inflexible faith in the Nigerian Nation and connected me to brothers and sisters in all nooks and crannies of Nigeria. Therefore, my declaration is a trumpet call for unity and action.

“May the Fulanis, the Hausas and the Tivs arise to this call with deeper faith in the Nigerian mission. May the Yorubas, the Igbos and the Ijaws awake to this call with stronger hope for a greater country. May the Efiks, the Ibibios, the Annangs the Kanuris, and indeed, all other ethnic groups in Nigeria hear this call and shout with joy that the clouds of national pains will soon bring forth showers of national gains.

“Fellow Nigerians, when the US Ambassador to Nigeria, Terrence McCulley, visited Akwa Ibom State he noted prophetically, “I have been to Akwa Ibom for the first time, but I have to say that with what I have seen, the future of Nigeria is in Akwa Ibom State.

“The future of the Uncommon Transformation of Nigeria; The future of making this country an African showpiece; That future that McCulley spoke of, is my dream Nigeria. I share this dream with you because the future is the property of those who believe in the beauty of their dreams. Together we will overcome every challenge.