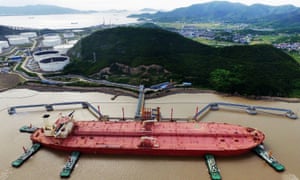 The thirst for oil in China, the world’s biggest crude importer, is drying up rapidly as the response to the coronavirus outbreak has seen industry shuttered and travel restricted.

The illness has killed 813 people, with all but two victims in mainland China. Reported cases in China alone have climbed to 37,198, less than two months after the virus surfaced in late December in Wuhan.

Data intelligence firm Kpler notes that imports averaged about 8 million barrels a day in the week through Jan. 29, down 27 per cent from the first half of the month.

The Lunar New Year holiday may have contributed to that slowdown, but the virus has slashed demand by about 20%, according to people with inside knowledge of the country’s energy industry, and China’s refiners have cut the amount of crude they are processing by at least 2 million barrels a day.

Consultants have slashed forecasts for oil demand growth for China and for the world as a whole. Energy Aspects now see China’s demand falling year on year in the current quarter and no increase at all in oil use worldwide. The three big oil forecasting agencies will publish their monthly outlooks this week. Demand projections are sure to be cut.

China seems to be pushing the flexibility of its term contracts to the hilt, seeking reduced volumes from all of its main suppliers. The four big Persian Gulf exporters could see requests from China down by 10%. That would cost them more than half a billion dollars a month at current oil prices of about $55 a barrel — no wonder they’re in a panic.

Their added worry is that there are other forces at work that could drive up the global supply of oil in the coming weeks. More than 1 million barrels a day of shut-in production from Libya could return rapidly if a United Nations conference in Cairo later today brokers a deal that allows the country’s ports to reopen.

Meanwhile, OPEC’s attempt to talk oil prices higher isn’t working. In early January, Brent was around $65 a barrel. By the final week of the month it was trading in a range between $58 and $60 a barrel as the group hemmed and hawed about bringing forward the March meeting. Last week, as the OPEC+ technical committee met but the prospect of a ministerial gathering receded, prices took another step down to between $54 and $57 a barrel.

If China asks for less oil, or tensions in Libya ease, prices are likely take another tumble next week.

The expansion of OPEC into OPEC+ has added a new layer of complexity to the decision-making process while contributing little in the way of real output cuts. Several non-OPEC members, including Mexico and Azerbaijan, are merely dressing up natural output declines as cuts, while others are ignoring their pledges. Russia remains a difficult friend, as my colleague David Fickling notes here.