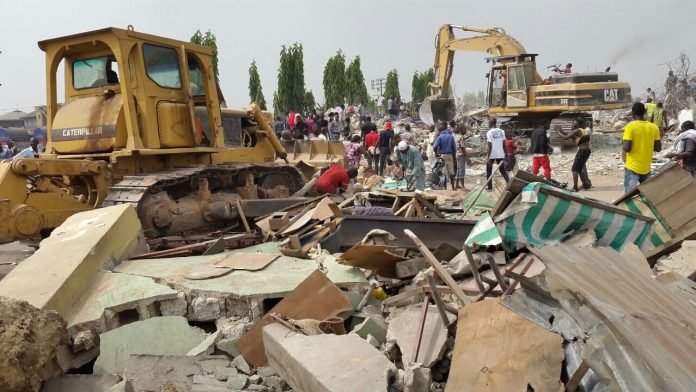 Traders, mechanics and other artisans operating in Agboju Market are counting their losses as bulldozers turned their goods, stores and workshops into rubles following the demolition of the market and other illegal buildings on Buffa Zone in Festac Town by the Lagos state government.

The task force, in collaboration with the Federal Housing Authority (FHA), demolished over 100 shops, shanties and other buildings at the place which is located on 2nd Avenue, Festac Town.

The FHA was reported to have given the affected occupants a notice of the demolition a week ago.

The Vice President, Nigerian Automobile Technicians Association (NATA), Amuwo Odofin Local Government Area, Isaac Kadiri, described the demotion as a disaster as the government had not made available an alternative place.

Kadiri said, ”We believe that if the government wants to chase us away, it should give us an alternative but it just gave us seven days’ notice to leave. We had an alternative place at 6th Avenue that was given to us by FESTAC Town Residents Association and Federal Housing Authority but the place is not ready.

“We put the access roads here, but look at what we are losing. We have lost more than 100 million here. What we have lost here we can’t gain back. We have mechanics, battery chargers, vulcanisers, panel beaters and painters as our members.

He said, “We want the government to give us a place where we can earn our living. If it says the site is ready tomorrow, we will move. We were paying rent to Amuwo Odofin Local Government. We are paying tax to Lagos State Government.  We pay rent of N10,000 each, per annum. We are more than 5,000 artisans.”

An affected occupant, a panel beater and painter, Hamad Tijani, said: “When we got here, it was just bushes and swamp; nothing was here but we sand-filled the place and many people are benefitting from here now. Government should help us as citizens of this country, there is no place for us to go.”

It can be recalled that earlier in the year, the Lagos State Government intensified its collaboration with the Federal Housing Authority (FHA) on the restoration of FESTAC Town and addressing the degeneration of its infrastructure.