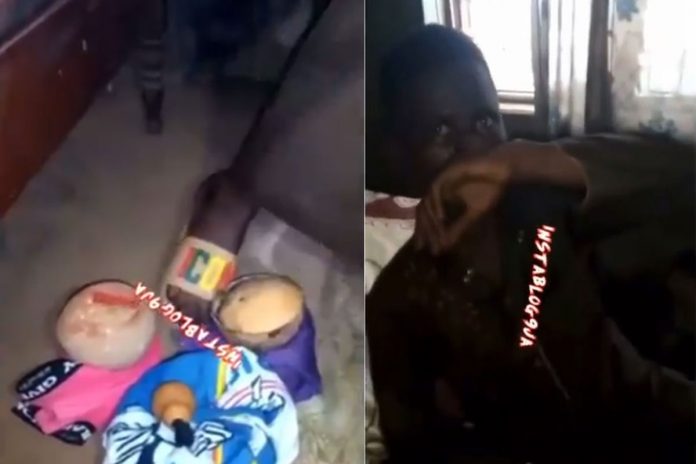 A student of Ekiti State University (EKSU) Ado-Ekiti, was caught with fetish items while allegedly trying to use his roommate for money ritual

The student who identified himself as Saheed Adeniran, was said to have been caught by some persons that exposed him in a video trending online.

According to the video, the incident occurred in Ifaki-Ekiti, Ido-Osi Local Government Area of the state.

When contacted, the Police Public Relations Officer (PPRO), Ekiti Command, Sunday Abutu, explained that the incident happened on Friday and that investigations have begun into the matter.

Abutu, however, noted that the suspect (Adeniran) had fled before the report was brought to the police, but efforts are on to apprehend him.

“The case is still under investigation. The incident happened on Friday, April 30th. The suspect is still at large. I don’t know how it happened, but it was when the report came to us that we started working on it.

“They did not report to the police immediately the incident occurred, though, we are still investigating what really led to it. It is until we get the suspect that we will know if it is a true story.”

When asked about the condition of the alleged victim (roommate) Abutu said: “I can’t tell if he was used, but in terms of his physical appearance he is still active.”