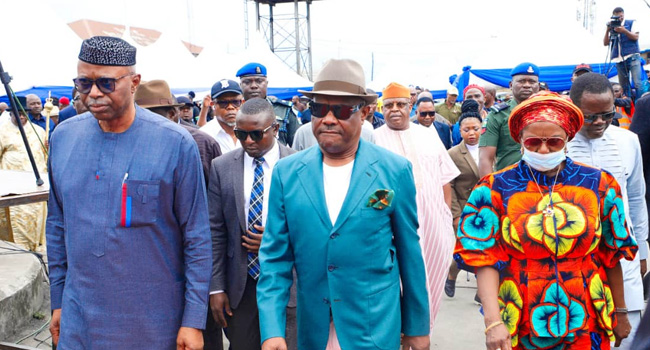 Former Governor Olusegun Mimiko of Ondo State om Wednesday disclosed in Port Harcourt, Rivers State, that Governor Nyesom Wike will play huge role in the Peoples Democratic Party (PDP)’s mission of rescuing Nigeria from misgovernance after the 2023 general elections. Mimiko commended Wike for his critical role in the Peoples Democratic Party (PDP) to sustain the party after the 2015 general elections. The former Ondo governor stated the PDP would have been emasculated but for Governor Wike’s resistance. He said that when some forces plotted to destroy the PDP, Wike was a bulwark that resisted the efforts.

Mimiko, commissioning the dualisation of Azikiwe -Iloabuchi Road in Mile 2 Diobu, River State, on the invitation of Wike, told the Rivers Governor, “beyond the self-evident physical transformation, you have stood as a bulwark against those sworn to emasculate the main opposition party, all in their bid to force a one-party state down the throats of Nigerians.

“You were at one point virtually a one-man countervailing force, defending and protecting our dear PDP.

“You have also, through bold legal challenges, deepened the national consciousness on the defects in the running of our defective federal system.”

Mimiko declared: “as the next general elections draw closer, Governor Wike will play a huge part in the PDP’s mission of “rescuing Nigeria” from misrule.

“It is a mission that must be accomplished. A mission for which you are specially positioned and favoured to play a major role.

“A mission that must be subscribed to by all lovers of our country.”