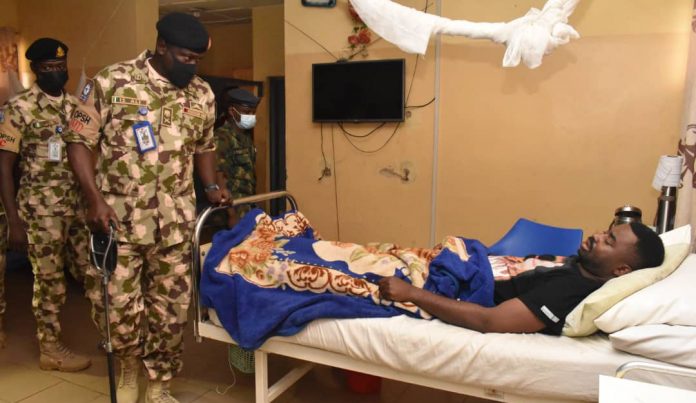 Share this on WhatsApp
Spread the love
By Kingsley Chukwuka
The Commander of the Military Task Force in Plateau, code named Operation Safe Haven (OPSH), Maj. Gen. Ibrahim Ali, has described as unfortunate the incident that led to the hospitalization of one of its personnel.
Gen. Ali said the sacrifices made by the personnel of the OPSH to ensure peace in Plateau, Kaduna and some parts of Bauchi State, cannot be quantified.
The Army boss stated this on Wednesday in Jos when he paid a visit to a wounded Soldier in an Air Force Military Hospital in Jos.
Our correspondent reports that the wounded personnel ACM Nwafor Nonso was on military patrol bike during a routine patrol to secure Mangu – Payam road in Mangu local government area of the State, when he had an accident and sustained various degrees of injuries.
However, the General prayed for quick recovery of the soldier saying that necessary measures have been put in place to ensure he gets the best treatment.
He reassured his commitment to the welfare of security agents serving in OPSH.
Share this on WhatsApp