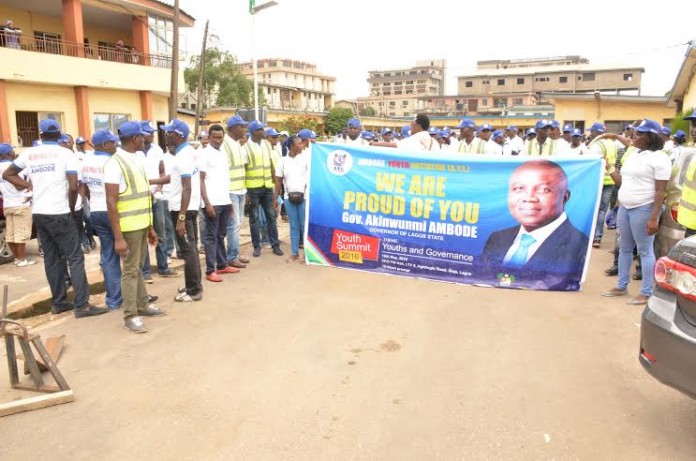 …names him best Governor in Nigeria

A Lagos based youth group,that strongly identified with the state Governor, Mr.  Akinwunmi Ambode, (Ambode Youth Initiative)has resolved to conscientiously support his positive style of governance,noting his considerable care for the youth one year into his administration.

The group which also prides Ambode as the best performing Governor in the country, stated unequivocally that “he is much more concerned about securing the future of the state by his mien with special attention to youths than any other state in Nigeria”.

This assertion was made by the Chairman of the group Comrade Temitope Ogungbo, while delivering his speech at the summit held in commemoration of Governor Akinwunmi Ambode’s one year in office at the main auditorium of the Eko FM Agidingbi, he lauded Ambode’s exemplary leadership and what it described as best policy thrust towards the youth in the entire country.

The programme recorded massive turn-out of members of the group and the general public.

In his remarks, Governor Akinwunmi Ambode represented by the Commissioner for Youth and Social Development Mrs Husamat Akinbile-Yusuf stated that Lagos State will continue to be hub of prosperities for young people and his administration will continue to ensure that young people find their place in governance to enable them assume responsible status for themselves, family and the nation.

Ambode stressed that the creation of Employment Trust Fund that will disburse about N25b annually and the establishment of Wealth Creation Ministry was to open space of opportunities for the youth to latch onto and prosper even in-spite of the current economic realities of the nation.

He thanked the group for their solidarity and commitment to supporting his administration in the interest of good governance and harnessing opportunities for all youth living in Lagos.

The guest speaker Prof AOK Noah, a Professor of Sociology at the Lagos State University, who delivered an intriguing lecture “THE ROLE OF YOUTH IN PIVOTING GOOD GOVERNANCE”, said young people should learn delay gratification so they can be able to engage government proactively. He said AYI must come up with proactive programmes for implementation by government.

In his words, “to challenge government is not to be physical but to be cerebral and productive; AYI must constantly send reminders to the governor about his electoral pledges and new developments worthy of his attention to ensure that ‘youths political and economic interests are actualized”.

Prof Noah projected that before the next anniversary, AYI would have presented the governor with a charter of pro-people demands in areas outside government’s conventional attention and many members would have embraced the idea of voluntary works.

The peak of the summit was the decoration of Governor Ambode and other dignitaries with official crest of the group which is a symbol of solidarity with the governor and as well icon for effective engagement of the government by the youth. Other dignitaries present at the summit were former Lawmaker for Oshodi Federal constituency Hon Maruf Akinderucon, APC stalwart Hon Bolaji Are, Special Assistant to the Governor on Civic Engagement Mr Taiwo Ayedun, Professor Chris Nwokobia Jnr and others.
500 AYI members earlier staged a solidarity walk,which saw them march to Lagos House to express their solidarity for Governor Akinwunmi Ambode.