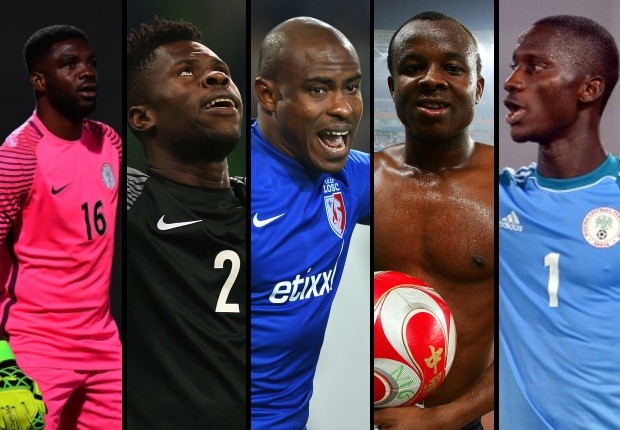 Share this on WhatsApp
Spread the love
By Esther Egbe
The retirement of Vincent Enyeama from the national team duty due to a row with former
coach of the Super Eagles, Sunday Oliseh, was seen as a big crisis in the team but Wolverhampton Wanderers shot stopper, Carl Ikeme, stepped in to allay the fears of Nigerians.
However, on July 6, it was announced that Ikeme was diagnosed with acute leukemia after returning abnormal blood tests during a routine pre-season check-up and the whole football family was plunged into another round of lamentation with some calling for the immediate return of Enyeama.
The performance of Chippa United’s goalkeeper, Daniel Akpeyi, in the ill-fated 2-0 home loss against South Africa increased the calls for a new goalkeeper, however the debut of home-based lad, Ikechukwu Ezenwa, in the crucial 4-0 annihilation of African champions, Cameroon, calmed frayed nerves.
National Daily report highlights the five top goalkeepers in the Nigeria Professional Football League who might be good enough to plug the goalkeeping hole for the Super Eagles.
.
Theophilus Afelokhai (Enyimba)
He was a cult figure during his days with Kano Pillars and continued with his top notch performance when he moved to the two-time CAF Champions League winners, Enyimba, relegating the former Peoples Elephant’s numero uno, Femi Thomas to the bench.
The coming of Ghanaian goalkeeper, Fatau Dauda, however reduced his appearances last season, despite that; he recorded 11 clean sheets last term.
He however had a poor outing in the final of the NPFL Super Six Invitational Tourney where he conceded two goals against MFM with fans calling for his replacement. Currently, he is one of the four goalkeepers in the Super Eagles camp in preparation for the CHAN.
Suraj Ayeleso (Nasarawa United)
Suraj Ayeleso was arguably the best goalkeeper in the NPFL in 2017, keeping 15 clean sheets for Nasarawa United and was rewarded with the Golden Gloves Award by the League Bloggers Award.
It was a big surprise that he was not considered for the national team until few days ago when he was called up to join the home-based team in camp.
The below par performance of Afelokhai in the invitational match was like a blessing in disguise for Ayeleso and if he could turn up, he might be on the plane to Morocco and probably get a look in ahead of the World Cup.
Ojo Olorunleke (Akwa United)
In 2015, Ojo Olorunleke was given the opportunity with the national U-20 and he gave an above average performance, helping the team to win the African championship in Senegal.
Just this year, he won the Aiteo Cup with his club, Akwa United, while also keeping 13
clean sheets in the league. Despite his performance, he has not been invited to the national team and he might be another choice in goal for the Super Eagles.
Ikechukwu Ezenwa (Enyimba FC)
He has been consistent with the national team before his breakthrough in the match against Cameroon, although he has been the first choice for the home-based Eagles and was in goal when the team crashed out in the first round of the 2016 edition of the CHAN competition in Rwanda.
Before the final of the West African Football Union competition in Ghana, Ezenwa had not conceded a goal from an open play for the Eagles both during the qualifiers for the CHAN competition and the WAFU Cup.
He however conceded four goals in the final of the competition against Ghana; two from the penalty spot while the other were scored from open play.
The current captain of the home-based team did not command much respect from the fans after his performance against Algeria, although he could be pardoned due to his inactivity at club level in the build up to the game.
Ezenwa recently switched to Enyimba from FC IfeanyiUbah and will be leading the Eagles to Morocco for the CHAN competition. He still remains the first option for Gernot Rohr.
Dele Ajiboye (Plateau United)
Currently the second choice behind Ezenwa in the home-based Eagles, Ajiboye recently won the NPFL title with Plateau United and has been ever present since he made his debut in 2007 for the U-17 in Korea Republic in 2007, winning the title in the process.
He later represented the Flying Eagles at the 2009 FIFA U-20 World Cup in Egypt and the qualifiers for the 2012 Olympic Games in Morocco.
He showed a lot of maturity anytime he has the opportunity and kept 12 clean sheets for Plateau United, winner of the NPFL title last season.
With better playing time, the former junior international might stake a claim for the number one position in the Super Eagles
Share this on WhatsApp
Related Topics:
Up Next

Silva lining : Why Arsenal should make a move for sacked Watford coach