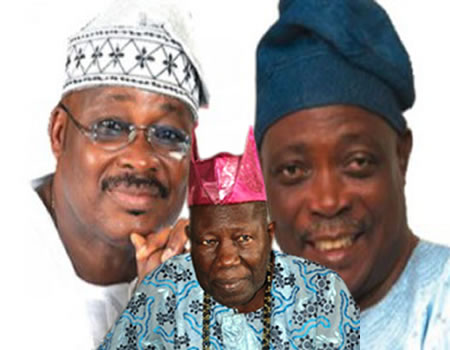 The Osi Olubadan of Ibadan and former Oyo State Governor Rashidi Ladoja has described the recent appointment of some Obas in Ibadan land as mockery that will not stand the test of time.

Speaking through media aide, Alhaji Lanre Latinwo, the former governor said he remained the Osi Olubadan of Ibadan, adding that he would neither agree to being a government-appointed oba without a domain, chiefs and subjects nor “support an attempt at desecrating the Olubadan throne”.

“People continue to ask the question: why the mockery of obaship in Ibadan is the most important thing to Ajimobi, of all the challenges facing his government? It is now clear that Ajimobi has found in this futile exercise, a distraction from his six years of misgovernment in the state.

“Ajimobi is using temporary executive power for ego trip and feels that he is humiliating perceived enemies and playing God. Why should the governor turn himself into a kingmaker, ignoring the long-established peaceful, self-reforming chieftaincy system of Ibadan, which has become the envy of many cities because it is rancour-free?

“Today (August 29) makes it exactly 21 months to the expiry of Ajimobi’s governorship. The state will surely be free from the stranglehold of the Emperor and the office will outlive the officer. Very soon, Ajimobi’s portrait will join those of ex-governors hung on the wall of the Executive Council Chambers. Whatever has a beginning must have an end.

“Again, we will like to appeal to the people of Ibadan to remain calm and peaceful, even in the face of provocation, as this misuse of power, pursuit of vendetta and bastardisation of a rancour-free process will be challenged to the end through constitutional and peaceful means.

“High Chief Ladoja is already in court over the matter and we await a judicial pronouncement on it soon. Ajimobi, who set up a panel disregarding Ibadan traditional system, received its report and interpreted its recommendations to suit his selfish agenda against the popular wish of the people of Ibadan and the Olubadan.

“Without recourse to the House of Assembly, which has the constitutional duty to make or amend laws, he has appropriated legislative function and added such to his Executive role. This charade can’t obviously pass a judicial challenge.