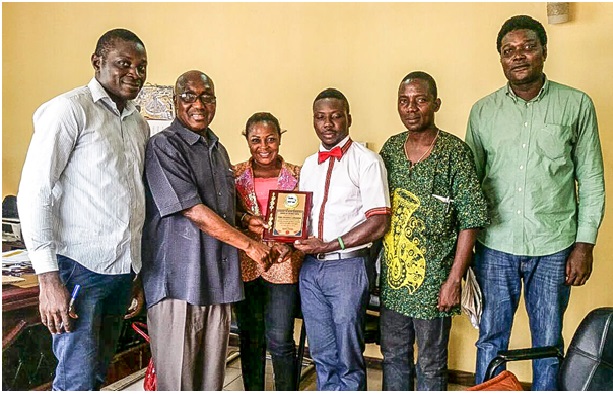 …insists on ranch fields for grazing

The recurring episodes of wanton destruction of lives and property by the Fulani herdsmen in Benue State may continue to linger if the Federal Government fails to enforce measures that will quell the menace forthwith.

The Chairman of NIGACHEM NIGERIA LTD, Engr. Sylvanus Ghasarah stated this when members of Benue Journalists Forum of Nigeria (BJFN), led by the President of the Forum Comrade Joseph Saater Undu paid him a courtesy visit in his Lagos office.

One of such measures, according to Ghasarah, is to educate herdsmen who reside in the state on the need to respect the rights of Benue farmers.

He expressed displeasure at the barbaric activities of the herdsmen with particular reference to the Agatu massacre and wondered why the nation’s security apparatus would be so handicapped to a point of not being able to muster up any rescue effort.

“What happened in Agatu could have been avoided, had there been a preventive measure in place, rather than counteractive. I am disappointed at the poor level of security intelligence because these so called herdsmen are allowed to roam about with arms, which is a breach to the laws of the country that forbid illegal possession of arms. The farmers are usually helpless at gun point even though they have the right to protect their farms.

According to Ghasarah, Governor Samuel Ortom, was quoted to have said, “Benue had 925,000 square kilometer landmass, which laid fallow for grazing, but that was 40 years ago. Things have changed and that is why there are cattle ranches in many parts of the world for grazing. I advise the government to educate the Fulani herdsmen on the need to use ranches for grazing as it is done at the Obudu cattle ranch, instead of roaming about indiscriminately and trespassing into people’s farms with arms. That doesn’t happen again anywhere in the world,” Ghasarah said.

He sympathized with the people of Benue, who depend mainly on their farm produce to survive, saying the government should also put measures in place to salvage the economic crisis biting hard on the people. But before that happens, the security of the farmers and their farms should be guaranteed by finding a lasting solution to the Fulani incursions, Ghasarah added.

In a remark, Comrade Undu said their decision to visit Ghasarah as one of the illustrious sons of the state was due to his pedigree and track record of achievements for Benue people even as a successful entrepreneur.

“We sincerely commend you for providing numerous job opportunity for Benue youths, we commend you also for putting the interest of your people very close to your heart. You have been of tremendous help to your community which is why, we come here to seek your opinion on the way forward over the crisis that is currently ravaging our state.”