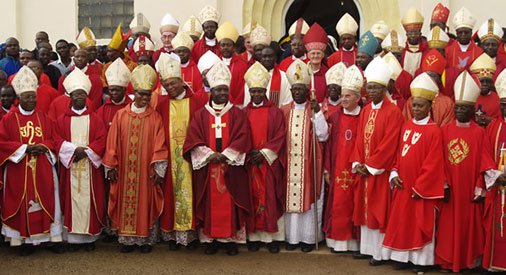 The Catholic Bishops of Ibadan Ecclesiastical Province have urged the Federal Government to protect all human lives at all costs to avoid disintegration and destruction of the Nigerian society.

The bishops speaking through their representative, Bishop Emmanuel Badejo, made this call at a public presentation of two books on Thursday at the John Paul II Centre, University of Ibadan, Ibadan.

The books are entitled: “A Catechism on Human Life: From Conception to Natural Death and A Catechism on Marriage and The Family: The Teachings of the Catholic Church”.

Bishop Badejo of the Catholic Diocese of Oyo said that where basic human lives were concerned, the government should be accountable by protecting them.

He added that government had the responsibility to protect lives irrespective of ethnicity, religion and ideology.

“The government is supposed to serve the people and everything done by the government must be of benefit to  the people, which includes protecting their lives.

” Government must do this not to favour anybody, any institution or personality at the expense of people’s lives.

“Every human life that is lost is blood crying out to God for vengeance and this can mean the destruction of a society.

“We suffer from daily sights of killings of adults, babies and pregnant women.

“The basic duty of government is to protect human lives, all other things fade into insignificance,” he said.

Badejo also advised the government to have respect for the traditional institution of marriage and shun laws that seek to abolish it.

“What we have now are so many wayward teachings.

“If the family system and marriage institution  are not protected,  eventually society will disintegrate.

“That is why God made it possible for only man and woman to procreate,” he said.

In his remarks, Archbishop Gabriel Abegunrin of the Catholic Archdiocese of Ibadan said the traditional institution of family and marriage was being challenged by ideological and economic motives.

“There are a lot of false teachings, misconceptions about human lives.

“It has become pertinent for the church to speak as eloquently as possible in a world where misguided emphasis is laid on mundane and material things.

“There is no doubt that the world today needs restoration through education and social mobilisation.

“Marriage institution still has values and worth and if you want to help the nation, you have to help the family take care of the children,” he said.

Abegunrin urged every citizen to have complete respect for  the dignity and the sanctity of human life.

“In this age,  people have forgotten that life belongs to God and have lost the conscience that God alone has right over human lives and no man should take it.

“We are calling on people of goodwill to shun any practice against human life.

“We are talking about development of the society. Human life is sacred, no other human being has the right to terminate another’s.” he said.

Dr Julianna Olusanmi, a human rights activist, said that the family remained the root and  the building block of the human society.

“The role of family in the society should not be underestimated. It is pertinent to societal development or its lack.

The book reviewer, Rev. Fr. Michael Banjo, said that the books were written to correct misconceptions and misguided principles about marriage, conception and family that were anti-Christians and anti-Africa.

He described the book as a moral guide to not only Christians but to all people of goodwill.

“The two books confront misleading ideology but seek to better educate Christians about marriage and promote and protect traditional Christian values,” he said.