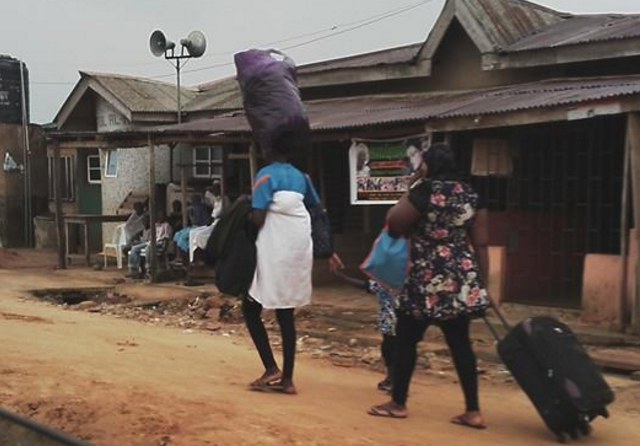 Share this on WhatsApp
Spread the love
Residents of Ikorodu Town in Lagos State have been evacuating their property from their homes in fear of further attacks by militants who invaded their communities recently despite the presence of security operatives in the area.
The residents, National Daily gathered, are responding to reports that suspected militants are planning to launch another attack on Ishawo and Igbo-Olomu areas of Ikorodu.
Several people in Ishawo and Igbo-Olomu in Ikorodu have vacated their houses following information of a possible invasion of the communities by the militants.
Pandemonium broke out in the evening of Monday, July 18 2016, when news filtered in that militants plan to invade some areas in Ikorodu again after the recent incident.
ALSO SEE: Renewed tension in Niger Delta: Militants threaten fresh attacks
Some communities in Ikorodu have been under attack, at different times, penultimate week, by gunmen suspected to be militants. Communities invaded by the gunmen in the attacks include Igbolomu, Ishawo, Ajegunle, Imuti and part of Igbogbi Estate areas in Ikorodu Local Government Area of Lagos State. So, the residents have reasons to be apprehensive and have loss of confidence on the security operatives.
It was gathered that the militants came through water channel since and started shooting sporadically. They were said to have escaped through one of the invaded communities.
Share this on WhatsApp