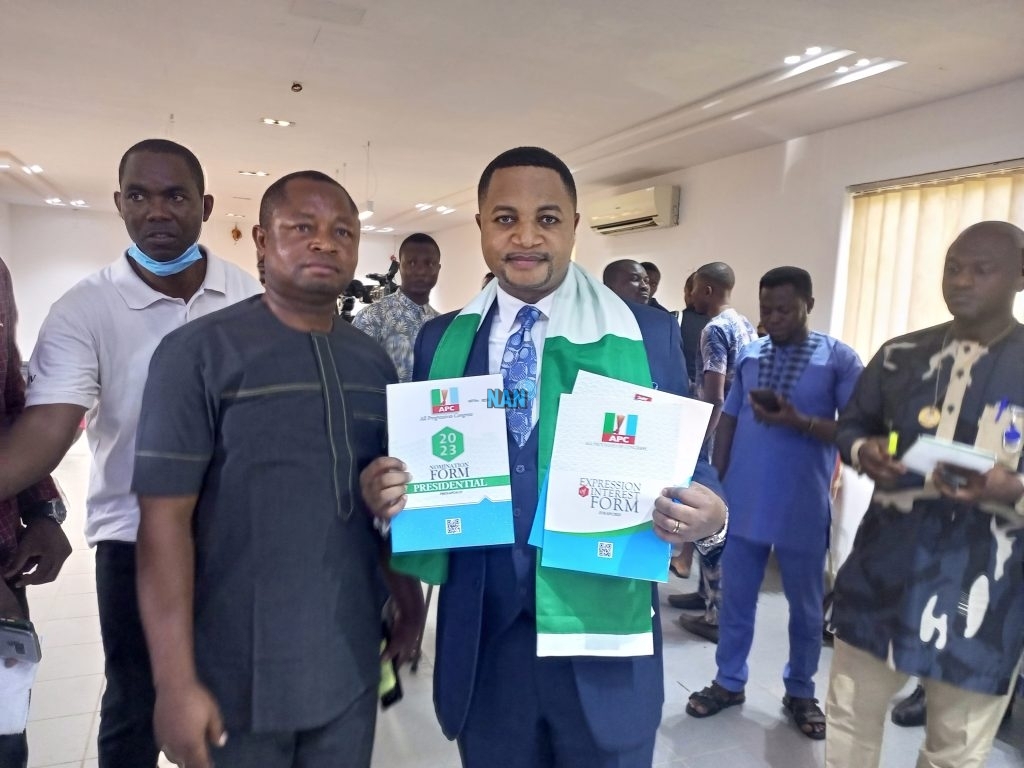 A 40 year old, U.S based Pastor, Dr Nicholas Felix has picked the APC presidential form. Felix, an All Progressives Congress (APC) presidential aspirant has pledged to address security challenges in the country if elected in 2023.

Felix, who stated this on Thursday in Abuja after purchasing his Nomination and Expression of Interest forms for the 2023 presidential election, said that securing a nation would have ripple effects on its economic stability.

The presidential aspirant, a U.S. based General Overseer and Founder of Miracle Center International Inc., said his dream was to take over the helms of affairs in Nigeria and make a change.

Felix has the headquarters of his church in New York, USA with branches in New Jersey, Texas Atlanta and in West Africa (Nigeria).

The News Agency of Nigeria reports that the presidential aspirant paid N65 million made up of N30 million for Expression of Interest form and N35 million for the Nomination Form meant for the youth in APC.

He thanked President Muhammadu Buhari and the APC leadership for giving the youth 50 per cent discount on the nomination form that enabled him to purchase it.

Felix, who said that he was the only youth to purchase the form to contest for the position of the president, said that addressing the challenge of insecurity would be his number one priority.

He said that his intention to contest the country’s number one seat was to salvage the country and rescue it from the trenches for complete reformation.

“My decision to run for president of Nigeria stems from my desire to change the Nigerian narrative through the support of the Not-Too-Young-To-Run law.

“Also, bringing more young professionals home and abroad together to contribute toward the development of our great nation,” he said.

Felix, a 2019 presidential candidate, described himself as a successful businessman, a philanthropist and pastor, who would  reposition the country in post-Buhari period.

He said that he came third in the 2019 presidential election on  the platform of the Peoples Coalition Party (PCP) after President Muhammadu Buhari of the APC and Atiku Abubakar of the PDP, polling 110,196 votes.

He expressed optimism that APC would provide the platform for him to fulfill his dreams of presidency and ultimately bring about the desired change the people wanted.

Felix said he had companies in U.S. and Nigeria and had hired thousands of people and that he was quite comfortable by every standard.

The presidential aspirant disclosed that his number one agenda if elected president was the protection of the citizens’ lives and property.

He expressed concerns that security was currently in a mess in Nigeria and that the level of security a nation has would determine its prosperity.

“My primary aim and my number one agenda is security, and that is what I am brining to the table trusting that 100 days after being sworn in, we will tackle insecurity with every force and every might.

“We have our military who are very strong, we need to empower them, equip them and give them the free will to be able to go and fight insurgency.

“I’m big on security. In America, I have a security company, where I have hired over 2,000 people. Security is my main strength.

“You must understand that there is no great economy without security, any country that is not safe, no matter how much  you put in, you will not see it.

“For example the moment Ukraine was invaded and the war started,  the economy crashed, that tells you that when a nation is not safe, progress will be stalled.

According to him, Mexico and Canada border America, yet Mexicans are suffering. Security is number one, when the country is safe, the economy will boom.

“Every nation that wants to experience economic growth must make sure that the security is there, because we need investors.

“It is the private sector that will create job and nobody will come to a nation that is not safe,” he said.

He said it was time for the youth to move into the political arena, saying the sole aim should not be limited to registering only to vote for preferred candidates.

He urged them to also become registered and active members of a political party with voting rights, the opportunity to choose preferred candidates amongst aspirants, over the influence of political godfathers.

Felix expressed concerns that Nigerian leaders, in spite of the changes they witnessed in other climes, never thought of replicating same in the country.

He said that they took pleasure in sending their children to schools abroad while impoverishing the nation.

He promised to change the narratives if elected, stressing that he would provide the political will to do the job.

Share this on WhatsApp
Related Topics:2023 elections40 year oldAPC presidential formInsecuritypickspledgestackleU.S based Pastor
Up Next

Osinbajo declares, “I am the most prepared presidential aspirant”