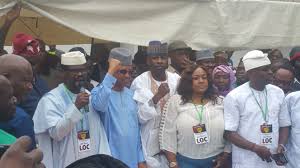 Share this on WhatsApp
Spread the love
By SUNDAY ODIBASHI
The 25th anniversary of the June 12, 1993, Presidential election which final result was inconclusive following the annulment of the process by then head of State, General Ibrahim Babangida, was marked with funfair and public lectures in different parts of Lagos State capital, Ikeja, and other states in the South West, which include Ogun, Osun and Oyo states.
The residence of the Presidential candidate of the Social Democratic Party (SDP), Bashorun M.K.O Abiola, was a beehive of activities as some pro-democracy forces and other advocates engaged in the struggle for the actualization of June 12 assembled to reflect on the tragedy of Nigeria’s democratic development.
A notable  Presidential aspirant for the 2019 elections,  Omoyele Sowore, joined the dignitaries at the residence of the demised presidential candidate who was denied the mandate by the military; he arrived at about 10.06am.
Sowore recalled the sacrifices made by those who led the struggle for the actualization of the annulled June 12 election, condemning the military tyranny that did not allow the will of the people to prevail.
Several other participants recalled that the June 12, 1993 presidential election remains the most transparent, free and fair election in Nigeria
While activities were going on at the country home of Abiola at the MKO Abiola Crescent, off Toyin Street, Ikeja, the children were in Abuja on another national ceremony where President Muhammadu Buhari conferred post-homous honourary award of the Grand Commander of the Federal Republic (GCFR) on Abiola in commemoration of the 1993 injustice.
Other activists inclduing Femi Falana SAN, Ayo Obe, etc, were also in Abuja on the invitation of President Buhari for the conferment of the post-humous honourary award.
Moreover, as early as 8.00am several other human rights groups and NGOs has started assembling at Allen roundabout, Ikeja, for a roadshow to Agidimgbi where Lagos State Government hosted another event.
Share this on WhatsApp
Related Topics:1993General Ibrahim BabangidaJune 12presidential election
Up Next