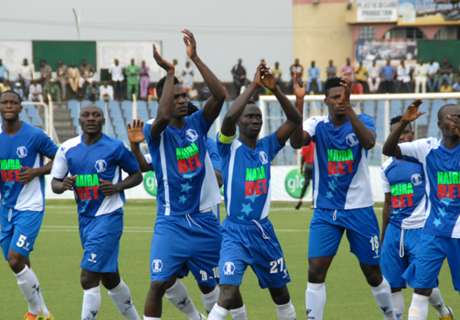 It was a show of class today at Lekan Salami Stadium, Adamasingba, Ibadan where Shooting Stars Football Club of Ibadan nailed Crown FC of Ogbomosho with a goal to nil to retain Oyo State AITEO Cup title,National Daily learnt.

It was Ajilete boys that first settled into the game with *Tobi Adeyi and Olanrewaju Oladimeji* latched a  shot wide to send a signal of 2015/2016 replica arrival to Shooting Stars goali and former ElKanemi Warriors, Yekeen Kazeem

The quick successive  incursions made by Crown FC of Ogbomosho in reminiscence of 4-2 outright win in Ogbomosho during the pre season friendly at Soun Township Stadium did not seem to shake Oluyole Warriors defense as Waheed Omololu and Taiwo Shittu remained calm and build up their game from the right flank  through the former Crown FC midfielder, Fatai Gbadamosi* who located Ayobami Junior and confidently rattled the duo of *Ugo Anozie and *Tayo Johnson* before deleting *Abiodun Akinola* and curled in a goal neutralising Adeniyi Adejare the Crown FC goali in his confine.

Second half began with glitz and glamour ,sexy brand of football from both sides as Ajilete boys trying to change the complexion of the game with *Hammed Yahya* a fresh mind was quickly brought into the game for *Obinna Christopher* and *Muazu Taiwo* evicted for *Babalola Ibrahim*. They both launched their attack but *Ogundimu Mutiu*, *Abey Benzon*,  *Shittu Taiwo* were busy keeping Barnabas Daniel and Olanrewaju abay throughout the duration

The combination of *Nurudeen Sanni*, *Opeyemi Olufemi*, *Akilu Muhammed* and *Fatai Gbadamosi* paid off with a through pass to Oussou Anthony who wrongly blabbed off the clear cut chance into the hands of Crown FC goali with fans madly disechanted with the striker.

At the 90 minutes of the game, the coast was clear for Ajilete Boys to level up but Taiwo Shittu of Shooting Stars appeared to have made a save of the season for the Shooting Stars with his last vein headed out the ball and later lying flat inside the net before he later regained composure.

4 minutes added time was full of antics and stoic derelicts from both teams as nothing eventful came to the fans and dignitaries present.

Earlier in the day,third place match went in favour of Pace Setters of Ibadan as they defeated non league side, Shaki United by 3-1.