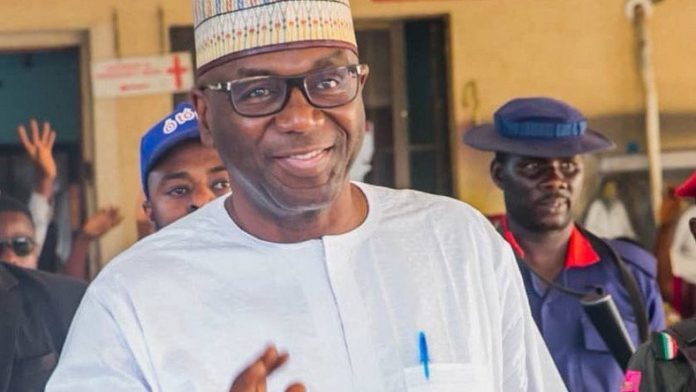 Gov. AbdulRahman AbdulRazaq of Kwara has advocated the need to equip local government councillors with adequate knowledge and skills on revenue generation and resource management.

AbdulRazaq made the call in Ilorin on Monday when he received the Group 6 Senior Executive of Course 44, 2022, of the National Institute for Policy and Strategic Studies (NIPSS), Kuru near Jos.

Dr Sambo Mamman led the team on the visit to the Government House, Ilorin.

The group, which started their weeklong study tour of the state on May 20, is working on the theme: “Strengthening Local Governance in Nigeria: Challenges, Options and Opportunities”.

AbdulRazaq, who reaffirmed that his administration does not interfere in the running of the local governments in the state, said it became imperative to guide the local councils on administrative techniques and against misplacement of priorities, amidst their agitations for financial independence.

“As a government we have a policy of non-interference. We believe in seperation of powers.

“The only interference we have with the local governments is to guide them on prioritisation of their spendings, with payment of salaries as their first line charge,” he said.

“With the situation in the country and what we met after they pay salaries there is basically nothing left to the extent that in the last two months we have to be lending local governments N400 to N500 million per month to be able to pay 100 per cent salary.”

He noted that local governments are today facing big financial challenge because most of the councils had over-staffed for political reasons, and on the basis of undue interference by the previous administrations in the state.

“We know the scope and focus of the local governments – primary healthcare. How did we find ourselves here, to a state where all their revenues, both federal allocation and IGR, go into paying salaries?

“That was the period you would see local government chairmen (in some parts of Nigeria) flying to Dubai and London, and the state governments too were trying to help them manage their funds by doing joint projects and helping them, basically interfering in their activities.

“In Kwara state in particular, 100 per cent of the allocation for local government have been for payment of salaries.

“Their staff strength grew up because they employed people who are not supposed to be there – fake names, ghost workers were collecting salaries and are still collecting till today,” he added.

AbdulRazaq also said a part of the local government money was going to wrong pockets, saying it requires more than using just BVN for the government to completely tackle the ghost workers syndrome in the local councils.

He told the researchers the challenges his administration inherited and how it is gradually overcoming them, with particular reference to the huge investments education, health and agricultural sectors.

He commended them for conducting a painstaking research on how to address the lingering financial crisis in the local government administration in the country and wished them success at the end of the study.

The meeting was attended by the Commander of the 22 Armour Brigade Sobi, Brig.-General Abubakar Andulsalam; Secretary to the State Government, Prof. Mamman Jubril; Special Assistant to the Governor on Security, Aliyu Muyideen; and Permanent Secretary Political, Cabinet and Special Services,Mr Sabitiyu Grillo.

The Leader of the team had earlier said their visit to the state was to ascertain the strength of local government councils and the challenges they face in their operations.

Mamman commended the governor for giving the local governments the needed support to thrive, even as he requested the government to guide the local councils on ways of improving their IGR to sustain them.

“Your Excellency, we have come to Kwara State to find out for ourselves how Kwara State Government is actually strengthening local governments in their domains; the challenges the state government is facing, and the options and the opportunities,” he said.

“We are happy and indeed commend you for the developmental strides we have seen. We sincerely appreciate you for what we saw even in the local governments, and that is an indication that you are actually assisting the third tier of government in the state.

“We know they are doing very well but I believe they will do even more better with more funding.

“And I want to say here that local government councils should be encouraged to explore other areas of internal generation of funds because they cannot continue to rely on the state government for all they need.”

Navy Captain Babatunde Qodir, who spoke on behalf of the participants, thanked AbdulRazaq and the state government for the warm reception and their given access to needed information throughout their stay.