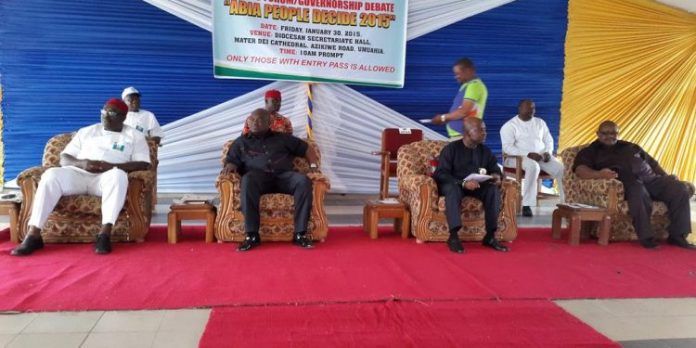 A debate for the governorship candidates of four major political parties in Abia on Tuesday ended with sporadic gunshots at Abia Hotels, Umuahia, venue of the exercise.

The gunshots and teargas canisters were fired by security aides to Gov. Okezie Ikpeazu and Dr. Alex Otti, the governorship candidate of the All Progressives Grand Alliance (APGA). This led to a stampede as scores of people, including newsmen and supporters of the candidates at the venue, ran in different directions for cover.

Trouble started immediately after the debate –as  the governor’s motorcade was about to leave the venue.

Many youth suspected to be student unionists had besieged the hotel, seeking to have audience with the governor.

They were said to have also organised another governorship debate in Umuahia on the same day and had invited the governor to participate.

Their attempt to get to the governor, who was already seated in his car, was stopped by his security aides.

As the students surged toward the governor’s motorcade, the security aides seized and manhandled their leaders, forcing other students to barricade the main gate to the hotel.

In an attempt to disperse the crowd and bring the tensed situation under control, the security aides fired several shots and teargas canisters into the air before forcing their way out of the hotel.

The debate, organised by a group of online practitioners and some private radio stations in the state, was attended by Ikpeazu, who is the governorship candidate of the Peoples Democratic Party and Otti.

Others were the governorship candidates of the Social Democratic Party and Accord Party, Dr. Blessing Nwagba and Mr Emeka Uwakolam.

Discussions at the debade centred mainly on the state of the Abia economy, security, infrastructure development, youth employment, education and health, among others.

He also scored himself high on education, security and healtha, agriculture and development of the small and medium enterprises.

His claims were however disputed by Otti and Uwakolam, who argued that the administration had further impoverished Abia citizens.

Otti faulted the governor’s claim on the number and quality of roads constructed by his administration, adding that insecurity worsened from 2015 to date.

He also said that only 59 roads with a cumulative length of 79.38km were constructed by the present administration.

They alleged that the administration failed woefully to transform the state, in spite of the huge resources at its disposal as oil-producing state, citing the Federal Government’s bailout fund and Paris Club refunds to the state.

Each of them alleged that the state resources had not been judiciously deployed in addressing the numerous development needs of the state by the Ikpeazu’s administration and promised to do better, if elected into office. 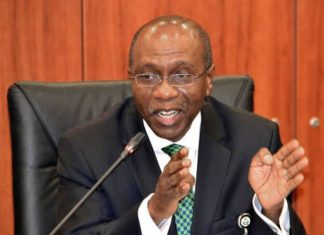 Editor 1 -
The Governor of the Central Bank of Nigeria (CBN), Godwin Emefiele, has withdrawn from the 2023 presidential race. The CBN governor who was aspiring...