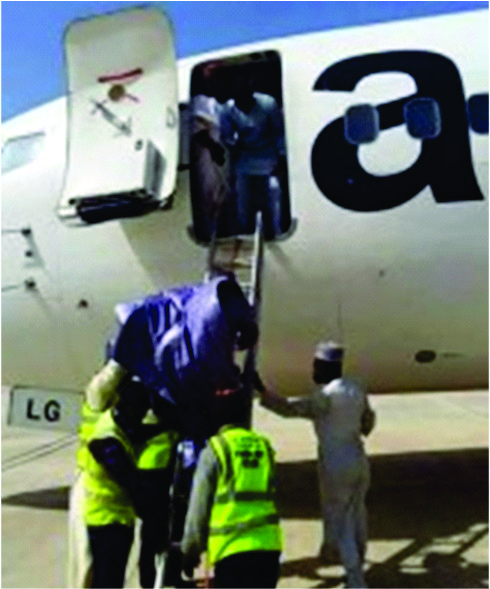 WHAT appears to be a shame on the Nigerian aviation industry played out on Saturday at Bauchi Airport when passengers were seen disembarking from an Aero contractors chartered flight from Abuja by a rickety ladder.
The picture which has gone viral on many social media networks, including facebook, twitter and google-plus is already generating sad commentaries from stakeholders and the general public on the integrity of the airline.
Not a few see it as great risk to the passengers subjected to disembark from its aircraft with the ladder.
The airline in a reaction however blamed the airport management stating that their equipment was unserviceable
According to a statement issued by Aero Contractors, the chartered flight had problems with unserviceable equipment by the airport management in disembarking about 34 passengers from Abuja. Consequently against the airline’s wish and operation safety guideline, the passengers used a ladder to disembark. “
“Aero wishes to state that it took adequate and safety measures for this operation, including the airport’s ground staff crew to handle the air stairs equipment in Bauchi, unfortunately it became unserviceable at the point of disembarkation. Although the airline crew tried to calm down the passengers to wait while the equipment was being fixed, the passengers insisted on their own volition to disembark against all safety protocol of the airline. “
However, when National Daily puts a telephone call through to the General Manager, Corporate Affairs of the Federal Airport Authority of Nigeria (FAAN) to ascertain why such a laxity should be encouraged, Yakubu Datti said it is not the responsibility of FAAN to provide ladders for passengers of aircrafts at any other airports.
He told National Daily that FAAN’s role is restricted to providing security at the airports among other administration duties.
National Daily also gathered that Bauchi Airport is a state owned airport and not under the management of the airport authority.