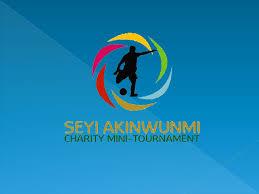 The city of Gombe, capital of Gombe State known as Jewel In The Savannah, is bubbling as the annual Seyi Akinwunmi Charity Mini-Tournament moves up north for the first time. The tournament comes up 18th – 22nd September.

National Daily learnt that Barr. Seyi Akinwunmi, who is the 1st Vice President of the Nigeria Football Federation and Chairman of the Lagos State Football Association, has been sponsoring a charity mini-tournament in the past few years in Lagos State which has been generating momentum for development of football in Nigeria.

The competition’s main objective is provision of scholarships for intelligent  but indigent children and support for ailing ex-international players. Over 200 children have been supported through the Courage Education Foundation, which has chosen the game of football to bring people together and raise funds for the Foundation’s goals.

A thorough and deliberate debonair lawyer of over 30 years at the bar who has disdain for doing things in half measures, Akinwunmi has driven the mini-tournament and the Foundation with a touch of class, charisma and consistency.

“Our goal is to provide the perfect platform for the gifted but indigent child to fulfill his dream, through combining good education with a career in sport. The truth is that talents abound in the nooks and crannies of our country. They are waiting to be discovered and nurtured. Most are from poor homes and need support to climb that ladder to get close to their dreams,” said Akinwunmi.

National Daily gathered best –practice conditions for the tournament in Gombe include that all players must be 13 years or below at its commencement; players must come from the same school as scholarship grant will be paid directly to the relevant schools; evidence of attending school and birth certificate/authenticated document compulsory and; letter from school and State FA verifying child is in school and medically fit to partake.