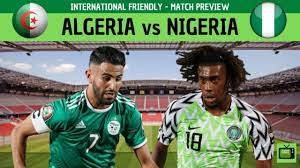 The Desert Foxes of Algeria on Tuesday defeated the Super Eagles of Nigeria 2-1 in an international friendly match in Oran, Algeria. The Super Eagles had taken an early lead but lost to the fireworks of the Algerians.

National Daily leant that Terem Moffi scored Nigerian only goal in the ninth minute of the first half. Manchester City attacker, Riyad Mahrez, scored for Algeria level  through penalty in the 41st minute to draw level before the end of the half.

Midfielder Youcef Atal scored the second goal for Algeria in the 61st minute to secure victory for the Desert Foxes.