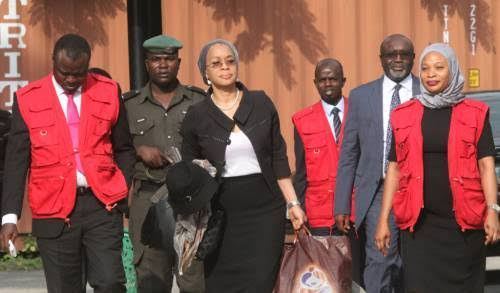 The Economic and Financial Crimes Commission (EFCC) on Wednesday brought a former Judge of the Federal High Court, Rita Ofili-Ajumogobia, and a Senior Advocate of Nigeria (SAN), Godwin Obla, for alleged money laundering.

Ofili-Ajumogobia and Obla were re-arraigned on 18 counts of conspiracy, unlawful enrichment, retention of crime proceeds and money laundering before Justice Rilwan Aikawa.

Each defendant pleaded not guilty.

Following an application by his counsel, Chief Ferdinand Orbih, SAN, Justice Aikawa granted Obla a N10million bail, among other conditions.

Ofili-Ajumogobia is already on bail on similar terms having taken her plea to the same charge on April 18, 2019.

The EFCC had earlier arraigned the duo on a 30-count charge bordering on corruption before Justice Hakeem Oshodi of an Ikeja High Court.

Justice Oshodi, on April 16, 2019, struck out the charge against Mrs Ofili-Ajumogobia and Mr Obla on the ground of a lack of jurisdiction.

The former judge was, however, re-arrested by operatives of the anti-graft commission as she made to leave the Ikeja High Court premises.

The prosecution preferred the same charges against the defendants on April 18 before Justice Aikawa.

While Ofili-Ajumogobia took her plea, second defendant (Obla) was absent.

On Wednesday, Obla arrived in court and was re-arraigned alongside Ajumogobia.

Her counsel, Messrs Robert Clarke, SAN, and Orbih, announced appearance for the both defendants.

Prosecution counsel, Mr Rotimi Oyedepo, urged the court to give a trial date, while the defendants be remanded in custody.

But Orbih informed the court of Obla’s bail application filed on April 24, adding that same had been served on prosecution.

He said the charge was only served on Obla in court yesterday morning and so, he could not have filed an application for bail while the charge had not been served on him.

But Orbih opposed him. He informed the court that he got wind of the proceedings on the pages of newspapers, following which he approached the court to get a copy of the charge even before receiving same from prosecution.

He told the court that the defendant was desirous of attending court and defending the allegations against him, rather than evading.

Orbih added: “My Lord, the defence is a senior member of the Bar, he was called to Bar in 1984, he became Senior Advocate of Nigeria in 2013. I urge my Lord to grant bail on liberal terms. In a bench ruling, Justice Aikawa also granted Obla a bail of N10 million with two sureties in the like sum, who must be landed property owners in Lagos.

The judge added: “The surety must not be below Grade Level 16 in the federal or state civil service. The defendant must deposit his international passport with the deputy chief registrar of the court. The defendant shall endeavour to fulfill the conditions within 10-days or the bail will be revoked. The defendant shall be released to his lead counsel, chief Ferdinand Orbih SAN, pending the expiration of 10 days.”

Clark also informed the court of a pending motion filed on May 13, challenging the court’s jurisdiction from entertaining the charge.

He said the substance of the charge had been decided by Justice Oshodi who, he argued, struck out the charge based on the Appeal Court’s decision in Nganjiwa’s case, “where it was decided that no judicial officer can be tried unless the NJC has sanctioned such judge. The position is still playing here.”

But Oyedepo opposed him, arguing that the position changed on November 7, 2018 when President Muhammadu Buhari approved the NJC recommendation for Justice Ajumogobia’s dismissal.

Justice Aikawa adjourned till May 23, for argument on the preliminary objection.