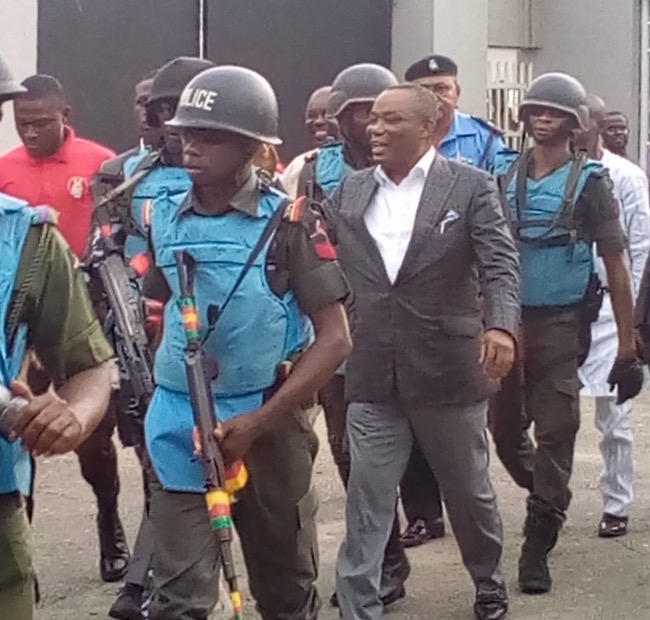 The Federal High Court in Lagos has discharged and acquitted Senator Peter Nwaoboshi of the N322 million money laundering charge filed against him.

The case was filed by the Economic and Financial Crimes Commission (EFCC).

According to Justice Chukwujekwu Aneke, the EFCC failed to prove the elements of the offences for which Nwaoboshi was charged.

Nwaoboshi was re-arraigned on Friday, October 5, 2018, alongside two companies, Golden Touch Construction Project Limited and Suinming Electrical Limited, on a two-count charge bordering on conspiracy and money laundering to the tune of N322 million.

One of the charges reads: “That you, Peter Nwaoboshi and Golden  Touch Construction Projects Limited, between May and June, 2014, within the jurisdiction of this honourable court, did acquire a property described as Guinea  House, Marina Road,  Apapa,  Lagos,  for the sum of N805million, when you reasonably ought to have known that the sum of N322 million out of the purchase price transferred to the vendors by order of Suinming Electricals Limited formed part of the proceeds of an unlawful activity of fraud and you thereby committed an offence contrary to Section 15(2) (d) of the Money Laundering Prohibition Act  of 2011(as amended) and punishable  under Section (15)(3) of the same Act.”

The second count charge read: “That you Suiming Electrical Limited on or about 14th May 2014 aided Peter Nwaobosi and Golden Touch construction Project Limited to commit money laundering contrary to section 18(a) of the money laundering prohibition Act 2011 and punishable under section 15(3) read in conjunction with section 15(2)(d)of the same act Peter Nwaoboshi and the companies who pleaded not guilty to the charge is currently on bail.”