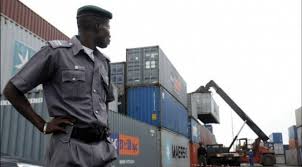 The command’s Public Relations Officer, Nkeiruka Nwala, said in Lagos on Wednesday that the amount is N2.5billion higher that the N37.39billion generated in April 2019.

She also said that the command generated N38.489billion in March 2020.

“Recall that the command in the first quarter of this year generated N110.204 billion even with lots of challenges globally and Nigeria is not isolated from these challenges as critical sectors of the economy are adversely affected.

“However, the Nigeria Customs Service, and in particular, the Apapa Area Command remain resolute at ensuring that we collect the much needed revenue for the Federal Government and also ensure the safety and wellbeing of the citizenry. This is through curtailing smuggling to its barest minimum while facilitating legitimate import and export trades,” she said.

Share this on WhatsApp
Related Topics:Nigeria Customs Service (NCS)
Up Next

Mix-up at Lagos Port, Transporters at loggerhead with Task Force over  passing of trucks